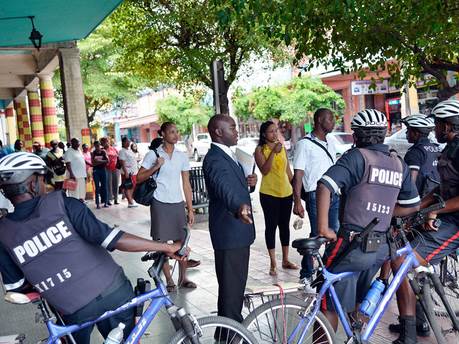 Nerve-wracking anticipation of a verdict being handed down yesterday in the high-profile Vybz Kartel murder trial brought a section of the busy downtown Kingston commercial district to a virtual standstill that harked back to the 1991 extradition case against notorious Tivoli Gardens don Lester Lloyd Coke, aka Jim Brown, as the police were forced to stave off a crowd which descended on the area.

Kartel, whose real name is Adidja Palmer, was still in custody, but reports that the defence and prosecution were presenting closing arguments at the Supreme Court triggered hope that the entertainer could be released anytime soon.

“Kartel! Kartel! World Boss rule di place!” screamed an elderly woman, as police personnel armed with high-powered weapons and pepper spray came out in their numbers, seemingly well prepared. Some civilians, including attorneys, complained that the law-enforcement officers were overreacting.

The shouts of the numerous fans who gathered in downtown Kingston to pay homage to the incarcerated entertainer under punishing heat grew louder as the cops pitched tent on the roof of the Supreme Court, with high-powered weapons in hand.

An elderly woman complained that there was no reason for the large gathering of fans or police as the embattled entertainer was not as big in stature as the senior Coke.

“Him no big like Jim Brown, so why should so many policemen come out?” she said.

The police worked frantically to stave off the curious, even as legal minds inside the Supreme Court building, wrestled over the fate of the entertainment icon, who has been behind bars for the past 30 months.

The lawmen stood their ground as the taunting sounds of “Kartel! Kartel! Kartel! World Boss fi free!” punctuated the tense atmosphere outside the courthouse, where prosecutor Jeremy Taylor was presenting closing arguments in the aftermath of defence attorney Tom Tavares-Finson’s.

The idol-like esteem to which Vybz Kartel is held by some sections of the public was in full glare when not only tattooed and bleached-skinned young men and women called for the controversial entertainer to be freed, but older women as well, and a few males also in their senior years.

The atmosphere was reminiscent of the worship-like behaviour of some members of the public to Spanish Town’s Donovan ‘Bulbie’ Bennett and Andrew ‘Bun Man’ Hope, as well as Kingston’s Christopher ‘Dudus’ Coke and Donald ‘Zeeks’ Phipps.

The police appeared polite but firm that civilians, with the exception of court workers and a few others, were to pursue alternative routes to their destinations. But when many in the crowd unleashed their venom, the cops were not amused.

A pregnant woman who was turned back threatened to “stab up” a policeman, while others taunted and jeered the crime fighters as they demanded the deejay be released.