I am calling on our prime minister to remove the youth portfolio from the stewardship of Minister Lisa Hanna. The youth portfolio can easily and naturally be attached to the Ministry of Education. This call is as a result of the minister’s repeated calls for the legalisation of abortion.

The minister’s view on abortion and her public role as youth minister is untenable. A minister of youth is to be championing the best interests of all youths, including the most vulnerable, of which unborn babies are a large subset.

The minister’s call for more progressive laws as it relates to abortion is seemingly because of her deep interest in the welfare of poor women and girls. Is the minister implying that only women of a certain class should have children? Do rich women make better mothers? The majority of us who are not rich and are busily raising our children can say that while financial resources are important, it is secondary to family support, love and commitment.

In which trimester does the honourable minister think it is suitable to perform an abortion? At three months, all the baby’s organs are formed and are beginning to function. At the second trimester, the unborn baby can hear the mother’s voice. In the third trimester, the eyes are fully opened. Does the minister know that there is a growing body of scientific evidence that states that the unborn baby feels pain during an abortion?

There are so many issues concerning the youth portfolio on which there is deafening silence, yet we have the minister of youth stridently calling for abortion to be legalised. Can the minister update us on the investigation on the sexual grooming in children’s homes which was done under the guise of sex education? How is the ministry dealing with youth unemployment, which is measuring more than 30 per cent?

Obviously, one’s views can impact one’s performance. Currently, the youth portfolio is not being effectively managed. We reiterate the need for this important portfolio of youth to be removed from Minister Hanna. Her stated and very public view on abortion cannot be successfully aligned with a ministerial youth portfolio.

I think that the youth portfolio should be quickly passed to another ministry, preferably the Ministry of Education with a state minister giving special oversight. 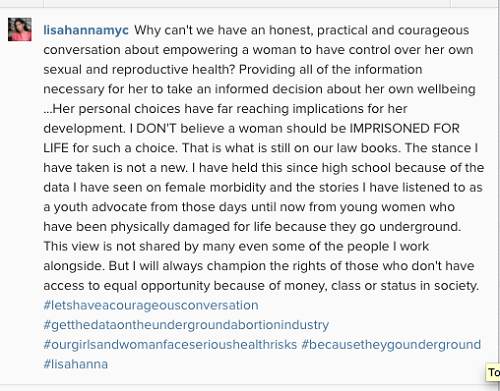