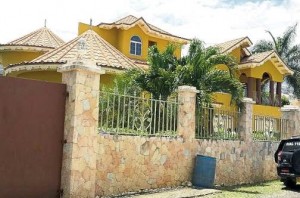 A 46-year-old man has been charged with money laundering by the Major Organised Crime and Anti-Corruption Agency (MOCA) West following an operation in the swanky Ironshore community on Holy Thursday.

A large house, allegedly belonging to the accused, was also seized by the Financial Investigation Division (FID) during the operation under the Proceeds of Crime Act (POCA).

The man was charged shortly after he was held in the house by the law enforcers.

According to Corporal Kevin Watson, spokesperson for MOCA West, Thursday’s operation — which was a continuation of a local and international investigation of a major crime syndicate — was conducted by MOCA and FID.

Thursday’s seizure brings to three the number of houses confiscated by the FID under POCA as part of the major probe in the upscale Ironshore community.

“These houses are involved in a connected investigation being carried out by the Major Organised Crime and Anti-Corruption Agency,” Corporal Watson said.

“These investigations, I must remind you, are also a collaborative effort with our overseas law. The overseas partners have already done their part and MOCA West has already charged persons in connection with this investigation,” he added.

Corporal Watson warned that MOCA will be unrelenting in its fight against crime. He also warned that properties belonging to people convicted under the Law Reform (Fraudulent Transactions) (Special Provisions) Act, popularly known as the Lotto Scam Act, will also be forfeited under POCA.

“This is the same method which we will be using to [seize] houses owned by lotto scammers. We will be going after their assets just as what obtains here. MOCA is dedicated to the fight against offences of organised crime. MOCA will continue the fight, along with its partners and other agencies, to take the profit out of crime,” Corporal Watson warned.

More than 500 people have been arrested, and billions of dollars in assets seized under the country’s anti-lottery scamming law, since it was passed in 2013.

Some of the cases have already resulted in convictions.