LOVE HAS NO BOUNDARY 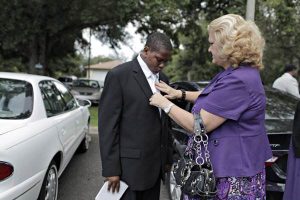 – St. Petersburg, Florida, U.S. – Davion Only, 15, follows along with the Sunday sermon at St. Mark …A 15-year-old Florida boy who’s been in foster care his entire life is so desperate for a family to call his own, that he recently took matters into his own hands.

Davion Navar Henry Only gathered his courage and stepped up to the pulpit at St. Mark Missionary Baptist Church in St. Petersberg, Florida, asking, directly, if anyone there might want to adopt him. He told the parishioners, “I know God hasn’t given up on me. So I’m not giving up, either.”

After learning that his biological mother, who gave birth to him while she was in prison, had passed away, he asked his caseworker, Connie Going, to take him to church so that he could make his request. She agreed.

Arriving in a donated black suit too large for him, wearing a zip-on tie that he wouldn’t have known how to tie himself, he followed intently along with the sermon before declaring, “I’ll take anyone. Old or young, dad or mom, black, white, purple. I don’t care. And I would be really appreciative. The best I could be.”

In a piece that ran in the Tampa Bay Times earlier this month, reporter Lane DeGregory recounts that the boy was shy, but he was determined to speak at the church.

His mother had been in jail on petty theft and cocaine charges when he was born. After his 15 years in foster care, Davion looked her up for the first time and found out that she had died. Since then, he’s been working to manage his temper and pick up the grades he let slump.

He couldn’t let nerves and shyness deter him from showing the people in the pews that he could become somebody’s son. So he walked to the front of the church, and he let his earnestness speak.

The Tampa Bay Times story detailing Davion’s plight has gone viral. The piece got 14,000 shares on Facebook just from the paper’s page, and thousands more from aggregation in the Daily Mail, ABC News, People magazine and others. His story has even been shared in Australian media.

If this were a movie, the happy ending would place Davion within a warm household, where he would learn to be loved and continue to ace his way through high school. But whether or not his brave stunt will earn him a home in real life remains to be seen.

Connie Going, the Eckerd adoption specialist in charge of Davion’s case, could not be reached for comment, but data from the Administration for Children and Families’ Children’s Bureau suggests that Davion’s chances aren’t great.

An agency report shows that black and Hispanic children made up the majority of kids in foster care at the end of the 2012 fiscal year. And out of 400,000 children in foster care last year, only 52,000 were adopted.

The Times reported that two couples asked about Davion at the time his story was published, but none neither had moved forward with an adoption.

Florida Department of Children and Families spokesperson Terri Durdaller said the agency got around 300 calls about Davion earlier this week. Since then, the number has risen to “several hundred.”

“We hope everyone who calls is a potential parent,” Durdaller said. “We’re hoping to connect him with a forever family and that this will bring recognition to the foster system in Florida.”

For more information on Davion or any of the foster children at Eckerd, call 866-233-0790 or visit Eckerd.org.

One thought on “LOVE HAS NO BOUNDARY”