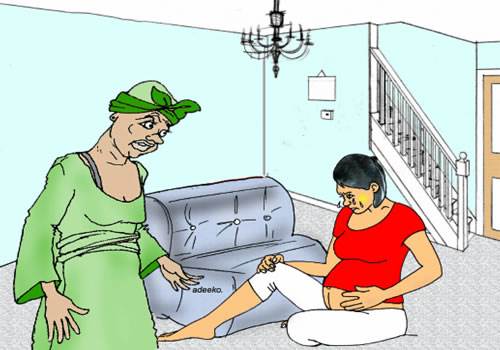 Dear Taiwo,
Please, help me out of this predicament. When my mother asked me to leave home and stay with her cousin and family members in Lagos, I am sure she did not bargain for what has happened to me. My mother is too peace loving to want this kind of life for me.
She has been doing it all alone, since our father died 11 years ago when I was just nine, my elder brother was 11 while my younger sister was just six. She wanted us; her children to have a better life, that was my father’s desire before he died prematurely. Despite the fact that the little he had and left for us were taken away by his family members leaving us with little or nothing, my mother will stop at nothing to make sure we were educated.
She was single handedly responsible for my elder brother’s schooling. So when I wrote and passed with flying colours my senior secondary school examinations and her cousin promised to help out with my schooling, she was relieved and happy to allow me go with her, though, not without she was very sure it was what I wanted.
ADVERTISEMENT
I did not write UTME, because we had agreed that I would stay a year at home, so that my brother’s fees would not be a burden. My mother’s cousin runs a very big unisex fashion outfit in Lagos, and we all agreed that it would be nice if I learnt fashion designing, while waiting to write my examination.
When we got to Lagos, my auntie’s husband did not agree initially for me to learn in her outfit. He said I should go to a regular school and prepare for my examinations without distractions. I pleaded with him to allow me do the training. So I trained in the mornings and attended extra-murals in the evenings.
After about six months that I have been going to my auntie’s shop in the mornings, she summoned me into her office one evening when one of her regular customers who also happen to be our church member was with her. When I entered, she asked me to take a seat, I was scared because my aunty is very strict with her work, I thought I had done something wrong. She asked me to relax after which she spoke to me about her visitor’s mission.
According to her, he came to ask for my hand in marriage. I was shocked! My hand in marriage? A born again member of a pentecostal assembly who is already married? I told my aunty to tell him that I was too young for that as all I wanted was to go to the university.
My aunty asked him to leave as she would speak with me and give him a feedback. When he left, my aunty called me back into her office and told me the benefits of dating him and having a child for him. She was the one who told me that he had been married for 15 years without a child and wanted a young innocent girl who would marry him and give him children.
I asked if it was right because he was still married to his wife and a Christian. My aunty asked me to forget these observation of mine because according to her, I needed to learn a lot. When we got home later, she raised it with me, I gave her the same answer. She shouted at me. When her husband asked what the issue was, she said it was nothing and she warned me not to tell her husband.
That was how we started. She even made me see why marrying and having a child for him would ease things for my family and I. Eventually, I agreed but not without his firm promise that he would be responsible for my education. My aunty promised to speak with my mother, she however made me promise not to speak with her husband about this for now.
This was how we started our affairs. Uncle Kunle; that’s his name was nice to me and very helpful with funds for my mother. I wrote my UTME and passed. I discovered I was pregnant the day I went to write my post UTME.
I told my aunty how I was feeling and she took me to the hospital where it was confirmed that I was pregnant. She said we should wait till after church on Sunday that she would find a way of telling him. This was because; we haven’t seen him for two weeks prior to then. We later learnt that his wife had been ill. Both of us were however shocked when Uncle Kunle came out and gave a testimony that his wife had conceived.
It took me all the strength I had in me not to faint when he announced this and everyone was happy and cheering. I couldn’t weep or cheer. When we got home, I asked my aunty what next and she asked me to be patient. We have been waiting patiently for him for almost two months now.
My auntie’s husband is beginning to suspect that something is wrong. He has been asking, but my aunty said I shouldn’t tell him anything. Please, what should I do? Kindly help me. I also wanted to go home and see my mother, but my aunty won’t allow me.