MARRIED COUPLE FINDS OUT THEY ARE TWINS 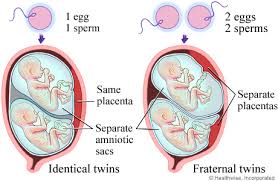 A married couple who recently consulted a fertility clinic after failing to conceive got the biggest surprise of their life. The Jackson Mississippi doctor who the couple went to for IVF treatment was shocked at the similarities in their DNA after doing routine test to see the relationship between the two samples.
A lab assistant was said to have been the one to summon the doctor about the eerie similarities in their DNA and after further testing it was discovered that the couple were indeed fraternal twins.

The pair were born in 1984 were both adopted by separate families after their parents had both died in a car crash. Close relatives were unwilling to adopt them and had signed them over to the state. The couple met in college and told the doctor that people often commented on the similarities in their looks but had no idea that they were brother and sister.

Marriage between siblings carries a maximum penalty of ten years in the state of Mississippi.

6 thoughts on “MARRIED COUPLE FINDS OUT THEY ARE TWINS”