The R&B singer, 45, filed court documents on Tuesday, July 26. According to TMZ, she cited irreconcilable differences and listed the date of separation as “to be determined.” She requested that Isaacs not receive spousal support. 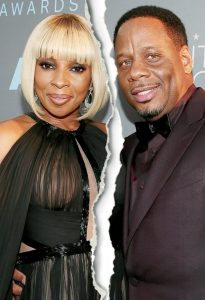 Blige and Isaacs tied the knot in December 2003 and have no children together. Isaacs is dad to three children from a previous relationship.

The Wiz Live! actress opened up about their relationship — and how he helped her get sober — in an interview with Parade magazine in 2007.

Hollywood’s Ugliest Divorces
“We met when I hated men. … After I met him, everything changed in my life,” she said at the time. “He was the first person to ever challenge what I did: ‘Why are you drinking? Why do you hate yourself? You don’t need to be around people who tear you down. You’re beautiful, Mary.’ He was the first man to ever tell me that.”

She later slammed breakup rumors in 2012. “My marriage is not on the rocks, but I would be a liar and my fans would hate me if I said to them, ‘Oh, we’re perfect and everything is great,’” she said on The Wendy Williams Show in February. “We have situations just like everyone else. We’re not out in public trying to kill each other, but it’s real. We love each other.”

On whether she wanted kids with Isaacs, she added: “When it’s time, when it happens, it’s in my future. I’m not planning it.”