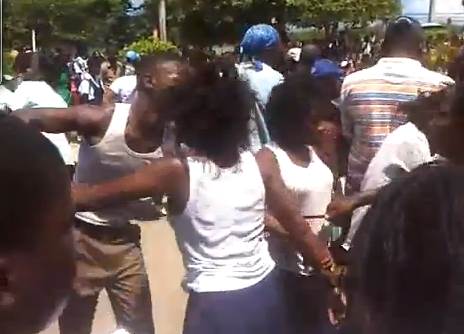 Details coming out of St. Thomas Technical are that there were no religious classes going on during the time of the unusual happenings. There was construction taking place on the grounds of the school which called for a digging of some sort.
During the digging it is said that the workers came into a burial site and some of the the remains had jewelry.Some of which were said to be stolen. Students became possessed by the spirits and some ran to the office of the principal banging on the door asking for back their jewelry.
After a while, many more children became possessed and the school sent for a religious leader in order to pray over the student body who were by then , becoming rapidly possessed. This did not help and a Kumina band was sent for, also there were no drums at the school.
When the Kumina band arrived, it is said that they were surprised at the amount of students that were possessed and tried to help but could not quell all of the students. Many of them still went home with the spirits still in them. Elders in the area say every year around the time of the Morant Bay Rebellion there are spiritual happenings throughout St. Thomas and Portland until around the 24th of October.
One woman said that when she heard of the happenings at the school, she thought it was the happenings of the rituals of the Morant Bay Rebellion but was quite puzzled by the amount of children who were possessed and at the time it was taking place. She said that everyone in the area knows that the school was built on an old sugar plantation, part of which was used as a burial ground for slaves and slave holders.