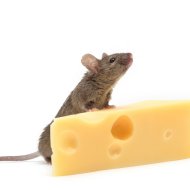 The Philadelphia Daily News reports that there is “a heavyset white man estimated to be in his late 40s or early 50s” driving around the town of Mayfair and occasionally pulling over to expose himself to women. The thing that makes him slightly different from other perverts is that he “displays a piece of sliced Swiss cheese and offers to pay the women to put the cheese on his penis and perform sexual acts on him using it.”

The police confirmed that they began looking for the man after “several women” have reported their encounters with him. “I understand that people may think this is funny, but this is no laughing matter,” said a representative from the Mayfair town watch. “We’ve had a couple individuals reach out to us. We’re taking this matter very seriously, and we’re working vigorously with police to get this guy off the streets.” In other words, hold your Philly cheesesteak joke — everyone already thought of it, anyway.