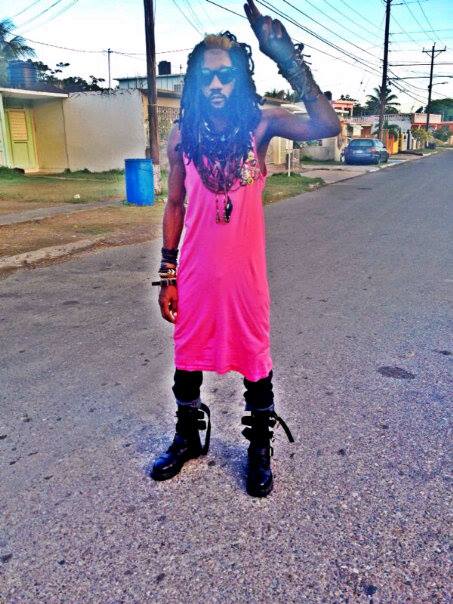 Fresh from a successful two-week tour of England, Shizzle Sherlock has now proclaimed himself to be dancehall’s ‘King of fashion’.
The often-controversial character, real name Omar Baker, has caught the eyes of many partygoers with his dressing, thus making him a very popular figure within the dancehall circle.
He has been gaining from such notoriety, however, as promoters, locally and internationally, see it fit to book him for their events knowing his ability to draw crowd due to his unique and bold fashion statements.
“My style unusual, because people always talk about it, so promoters pay me fi appear at their events. If a promoter book mi for their event dem sure a crowd, because people ago come out to see what Shizzle Sherlock is coming with. A my style mek mi can take care of mi family,” he reasoned, in reflection of his seven-month-old son Lamar.
Recently, Shizzle Sherlock appeared at several shows in Birmingham, London, and Bristol. He also made a special guest appearance at an event named UK Chug It in London, and starred in two music videos Dutty Badmind and You Alone, done by UK-based dancehall artiste Danga Pro.
He also held a homecoming party on August 10 inside Limelight nightclub, which featured Barbadee and Fyah Tripe. He is already planning for his annual brown and white birthday party to be held in December.
Shizzle Sherlock is currently preparing for a month-long tour of Canada, which runs from August 31 to September 27.