MOM HAD PREMONITION OF DEATH AND POSTED IT ON FACEBOOK 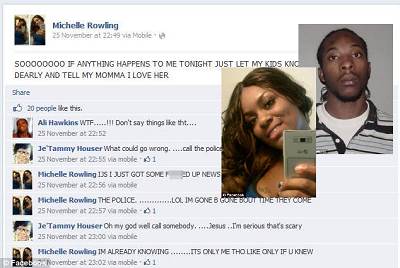 IF ANYTHING HAPPENS TO ME, LET MY KIDS KNOW I LOVE THEM… a mother’s FB status 3 days before ‘ex-boyfriend stabbed her to death’

Michelle Rowling, mother of two, was taken to a nearby hospital in East Saint Louis for multiple stab wounds but was pronounced dead on arrival. Her ex-boyfriend Montrell Cooper is now being sought as a person of interest in the case.

Cooper was released from jail November 25th, the day of Michelle’s chilling Facebook post, for an assault against her in August. Friends and family said he was upset that she was trying to move on with her life and threatened to kill her.

‘I JUST GOT SOME F***ED UP NEWS,’ she wrote. The bad news Michelle may have received was that man who threatened to take her life was just released from jail. A friend suggested she contact the police, ‘THE POLICE… LOL IM GONE B GONE BOUT TIME THEY COME’ she replied.

Rowling testified on behalf of Cooper for a prior assault, leaving him with probation instead of jail time, friends said. The state attorney once again sought prison time for Cooper but Rowling was uncooperative. The court released Cooper once again on Monday. VIDEO BELOW