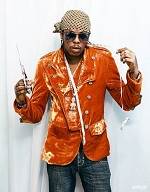 Calvin Moonie Hanes, designer/road manager extraordinaire to Gaza was released on bail this weekend. Moonie was allegedly locked up because of his affiliation with Adija Vybz Kartel Palmer . It is alleged that Moonie was the key to unraveling the case against Kartel as he was second in command and helped in a lot of decisions Kartel made. The JCF saw Mr. Hanes as a good source of information for them as it is alleged that Mr. Hanes had promised to lead the police to a phone that had some recordings and give the police details on Kartel and testify against him. At first he was allegedly released in order to give the police leads to further support the evidence they had but the evidence was not surrendered and he was remanded. It is said that when Mr. Hanes was released he got in contact with Kartel who made arrangements for a lawyer to assist Mr. Hanes and since then, the police has not be able to coax Hanes in giving the information needed. It is further alleged that Hanes is the ONLY member of the Gaza entourage with his hands clean.