MORE DETAILS ON THE DEATH OF ANDREA WILLIAMS 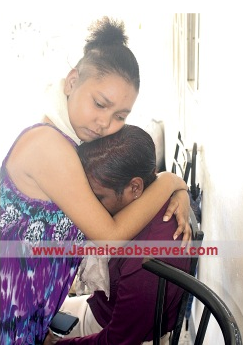 SHOCK and disbelief rocked the communities of Port Morant and Airy Castle in St Thomas Sunday, following the unexpected death of Andrea Williams — the mother of 14-year-old Leslie-Ann Goulbourne who was diagnosed with brain tumour.

Williams, who sought financial help for radiation treatment for her daughter through a Sunday Observer story published on February 15, died at the Princess Margaret Hospital where she was admitted for a week and three days from what her mother said was a collapsed lung resulting from stress.

Williams had spent close to $5 million for treatment and daily care of her daughter, who had to undergo four brain surgeries and radiation treatment for the tumour in her head before it was discovered that the non-malignant tumour — known as germinoma — had spread to the child’s spine.

“She gave up,” Syble Williams, the deceased woman’s mother told the Observer at their Airy Castle home on Monday. “The doctor said she was stressed from head to toe and that she was drained out to nothing because she was fretting on the little girl. She was there for her from the beginning to the last breath.”

“The relationship that they have is very unique,” the elder Williams added. “She had a little cough and shortness of breath and because she had to go up and down with Leslie-Ann, she didn’t have the time to eat much or take care of herself. She visited the doctor twice three weeks ago and was nebulised, but they did not understand why she was still breathing short.”

A follow up X-ray revealed that the lungs of the 40-year-old mother of four were collapsing. As a result, she was sent off to the hospital where she was immediately admitted.

Days before her admission to hospital two Thursdays ago, Andrea told the Observer that things had taken a toll on her physically and that she was not feeling well, while also explaining that her next move was a visit to the hospital for a check-up.

During her time in the hospital, her sick daughter — who was advanced into her radiation treatment — was prevented from visiting her for her own safety. However, on Sunday, after numerous requests from the ailing mom, the staff agreed for the child to visit.

After mother and child hugged that evening, Andrea took her last breath in front of her daughter.

“She died right in front her eyes,” Howard Williams, one of the child’s uncle said. “That’s really hard on her, really hard for any child to see.”

The family explained that since then, Leslie-Ann has not been doing well.

“She sleeps a lot now,” Howard said. “She cries a lot. She will wake up and just cry that she wanted her mommy and miss her mommy and then just break down in tears, then go back to sleep.”

The family said since her mother’s passing, the child has also started coughing and complaining of sore throat, despite the significant improvement she experienced from the radiotherapy for the last four weeks.

Today the family is unsure what will become of the child.

When visited, a sombre mood rested over the Ministry of Labour and Social Security office in Morant Bay where Andrea worked as a secretary for 20 years. She was described by manager Dorrett Grant as a kind person, who got along well with all the staff members. She said the situation has impacted staff members who had to be counselled.

Grant explained that the young mother went on sick leave on February 24, and it was evident she was not well as her breathing was laboured. However, they did not quite understand extent of her illness.

“Her death took us all by surprise,” Grant remarked.

Meanwhile, Eunice Beckford, public relations officer for the Port Morant Community Development Committee who recently staged a walkathon to raise funds for Leslie-Ann, said more than ever the team will continue to raise funds for the child’s treatment.

“We ask that you keep Leslie-Ann, her siblings and the rest of the family who have been devastated by the untimely passing in your prayers,” Beckford said.

0 thoughts on “MORE DETAILS ON THE DEATH OF ANDREA WILLIAMS”