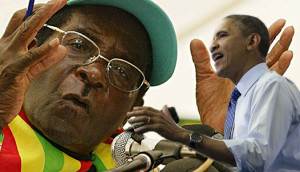 HARARE, Thursday
Zimbabwe President Robert Mugabe has renewed his onslaught against white farmers saying they would no longer be allowed to own land in the country.
The 90 year-old old leader, who launched a violent land reform programme in 2,000 that displaced the majority of the 4,000 white commercial farmers, on Wednesday said Zimbabwe was no country for white farmers.
“There are white farmers who are still on the land and have the protection of some Cabinet ministers and politicians as well as traditional leaders,” President Mugabe said.
“That should never happen and we will deal with ministers but as for our chiefs we do not want to harass you. We do not want trouble.
“I have been given a list of 35 white farmers in Mashonaland West (province) alone and in just a few districts that have been audited.
“We say no to whites owning our land and they should go.
“They can own companies and apartments in our towns and cities but not the soil.
“It is ours and that message should ring loud and clear in Britain and the United States.”
President Mugabe has often justified the wholesale seizure of productive farms saying he was correcting historical injustices.
However, the land reform programme saw Zimbabwe’s agriculture based economy taking a serious knock and the country’s now experiences perennial food shortages.
Tony Blair
The veteran ruler blamed former British Prime Minister Tony Blair for the chaos in Zimbabwe’s agriculture industry. “We had an agreement with the Margaret Thatcher government and when Tony Blair came he reneged on that agreement,” President Mugabe said at a function to launch a document that would be used by the new farmers as collateral.
“I pleaded with him to review his decision but he was boy from the street with no experience so he stuck to his guns.
“I was not amused and told him to keep his England and we would keep our Zimbabwe.
“We will not pay for our land and we will not ask our people to pay for it because they never paid for it in the first place,” he added.
“They were selling to each other amongst themselves and we will not recognise any of that nonsense.
“They were living like kings and queens on our land and we chucked them out. Now we want all of it.”
The chaotic land reforms led to Zimbabwe’s international isolation with the United States, the European Union (EU), Australia, Canada and New Zeeland all imposing sanctions on the country.
The EU had indicated it will ease sanctions against the country in November because it was encouraged by reforms in Zimbabwe.

0 thoughts on “MUGABE SAY ALL WHITE FARMERS OUT..AND DEM NUH FI GET A DIME BECAUSE DEM NEVA BUY NO LAND”