NO HELP AFTER BEING INJURED BY JUTC BUS

BY ALPHEA SAUNDERS Senior staff reporter saundersa@jamaicaobserver.com ONYX Mathison, a 15-year-old Holy Childhood High School student, has been out of school for almost two months after she was injured when the door was closed while she was disembarking a Jamaica Urban Transit Company (JUTC) bus on December 8. 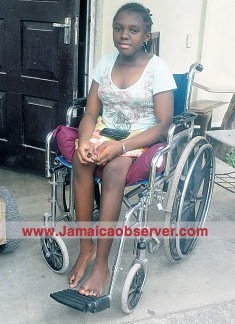 ONYX Mathison, a 15-year-old Holy Childhood High School student, has been out of school for almost two months after she was injured when the door was closed while she was disembarking a Jamaica Urban Transit Company (JUTC) bus on December 8.
The child’s mother, Karen Brown, told the Jamaica Observer that Onyx, who walked with a limp because of the rods placed in her leg because of a bone problem, is now confined to a wheelchair. The limp, said Brown, made it difficult for her daughter to move fast, and as such she had to enter and leave the bus at a much slower pace than other passengers.
As a result of the incident, in which her leg was broken in two places, she had to endure the removal and replacement of the damaged rods in her leg, said Brown, who added that the child’s medical bills from the University Hospital of the West Indies have reached $500,000.
Brown recalled the afternoon she received the call from her daughter, howling in pain, “Mommy, my foot break…I’m on the bus step in Cross Roads.”
According to Onyx, she took the bus from Half-Way-Tree to Cross Roads and she was the last passenger to exit. But upon reaching the last step, the doors closed on her.
“As I was stepping down, before I could put my foot out of the door, the door closed on my foot, and I screamed. The driver opened the door and I fell on the floor inside,” she remembered. Her ordeal was not to end there, as she said the conductress told her to “Stop the noise!”, on the way to the hospital in the back of a police service vehicle.
“It’s hard, [as] I’m a single mom. It’s not like is carelessness (caused the injury),” said Brown, who told the Observer that she is yet to get any form of compensation from the JUTC.
When contacted yesterday, the JUTC’s Marketing and Communications Manager Clinton Clarke was unable to answer specific questions about Onyx’s case, but explained that each case was treated based on its own merit as “the circumstances determine the overall outcome”.
Said Clarke: “We investigate in order to establish liability. When that is done, and a claim is made, it then goes through the investigative process…and then it gets to the settlement stage.” However, he gave no specifics about turnaround time for compensation, noting that it was dependent on the nature of the case. “There are some claims that are more complex than others,” he stated.
Onyx’s mother said the police are yet to take a statement from her daughter, although the JUTC driver submitted a statement to the Cross Road police on the same day of the incident.
“… My child is just as important as anybody else’s child. I am just as important as anybody else in this country. Treat her fairly! She is supposed to be in school,” Brown stated.
According to Brown, Onyx, who wants to become an attorney-at-law, fears falling behind as efforts to have the school send the girl’s lessons to their home in Cheshire Village have been unsuccessful. She has appealed to the school’s administrators to take a special interest in Onyx’s situation. “Education is her way out of this,” Brown said.
In the meantime, Brown, a vocal member of the disabled community in Papine, St Andrew, said the unfortunate incident involving her daughter was indicative of the wider problem that a number of disabled people continue to experience with the JUTC.
She said it is a long-standing issue where disabled people are often told that they are to “wait on your bus (for the disabled)” when they attempt to board regular buses. Brown claimed, too, that drivers have very little patience with the physically disabled, who are unable to move as quickly as they would like. “The JUTC people don’t like to see us on the road,” she claimed.
Brown said that JUTC drivers and conductors need extensive training in how to deal with the disabled. “If you’re going to put drivers out there, teach them tolerance, especially when you put them on the 77 and 78 routes. Disabled people will take the bus because we have no choice. How many of us can buy cars?” she asked. “Ninety-five per cent of us in the community are unemployed, but we still have to live,” she said.
Like Dr Annicia Gayle-Geddes — the friend of Marlon King, who was struck and killed by a JUTC bus in Papine last week — Brown said a greater effort should be placed on integrating the disabled into the society, which would include having all buses with access for members of the community.

0 thoughts on “NO HELP AFTER BEING INJURED BY JUTC BUS”