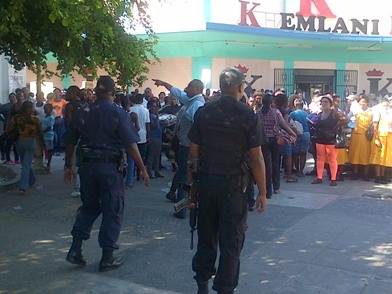 KINGSTON, Jamaica — A large and noisy crowd has gathered in the vicinity of the Home Circuit Court downtown Kingston after rumours began circulating that entertainer Vybz Kartel was freed of murder charges.

A contingent of police is outside the courthouse attempting crowd control as people clamour to see the DJ emerge from the courthouse.

Where the rumour started is uncertain but is has gained traction and even lawyers have been calling the court to find out if it’s correct, a source inside the court house told OBSERVER ONLINE.

“Kartel is right now sitting down in the dock waiting for the judge to restart the trial,” the source said minutes after 2:00 pm.

In the meantime, Kartel’s trial has been adjourned until 2:00 pm Wednesday.

Prosecutor Jeremy Taylor told the court on resumption that he was unable to get witnesses to the trial today.

0 thoughts on “NOTHING TO DO”