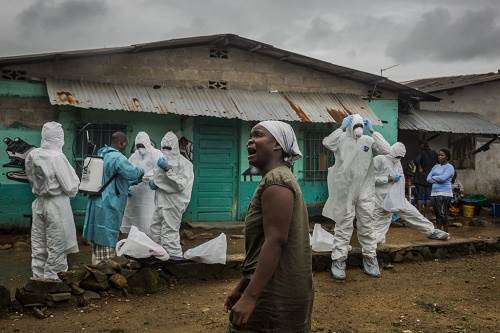 The UN nuclear agency said Tuesday that it will provide specialised equipment to West African countries hit by the Ebola outbreak to help faster diagnosis.
The International Atomic Energy Agency will send to Sierra Leone “in the coming weeks” a machine using the so-called Reverse Transcriptase Polymerase Chain Reaction (RT-PCR) technology.
RT-PCR allows the Ebola virus “to be detected within a few hours, while other methods require growing on a cell culture for several days before a diagnosis is determined,” the IAEA said.
“Early diagnosis … if combined with appropriate medical care, increases the victims’ chance of survival and helps curtail the spread of the disease by making it possible to isolate and treat the patients earlier,” it said in a statement.
In addition, the Vienna-based body will ship out cooling systems, biosecurity equipment, diagnostic kits and other materials. Similar support will be provided to Liberia and Guinea, it said.
Sierra Leone and other affected countries are already applying RT-PCR, but their capability is limited due to shortages of diagnostic kits and other materials.
The method, co-developed with the UN Food and Agriculture Organization (FAO), was instrumental in the global eradication of rinderpest, long a scourge of livestock.
RT-PCR initially used radioactive isotopes to determine the presence of a virus but subsequent refining of the process has led to the use of fluorescent markers instead.
The Ebola epidemic has killed more than 4,400 people this year, mostly in Guinea, Sierra Leone and Liberia, prompting the World Health Organization (WHO) to brand it “the most severe acute public health emergency in modern times”.
– See more at: http://www.vanguardngr.com/2014/10/nuclear-help-faster-ebola-diagnosis/#sthash.mfklq8q1.dpuf