NUN SAYS SHE DIDNT KNOW SHE WAS PREGNANT……….GIVES BIRTH 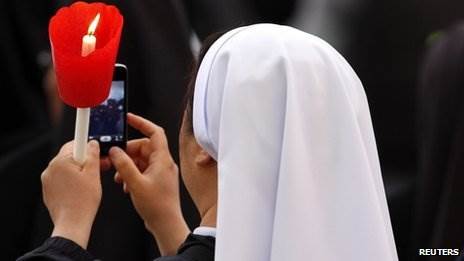 A nun who gave birth to a baby boy in the central Italian city of Rieti, said she had no idea she was pregnant, local media report.

The 31-year-old was rushed to hospital with abdominal pains, which she thought were stomach cramps.

The young mother, who is originally from El Salvador, reportedly named her newborn Francis after the current Pope.

The mayor of Rieti, Simone Petrangeli has appealed to the public and media to respect the woman’s privacy.

The news has drawn international attention to the small city of 47,700 inhabitants.

The nun called the ambulance on Wednesday morning. A few hours later she gave birth to a healthy baby boy.

“I did not know I was pregnant. I only felt a stomach pain,” she was quoted as saying by the Ansa news agency.

People at the hospital have begun collecting clothes and donations for the mother and her child, Italian media say.

The woman belongs to a convent near Rieti, which manages an old people’s home.

Fellow nuns at the convent said they were “surprised” by the news.

“I guess she’s telling the truth when she says she arrived at the hospital unaware of the pregnancy.”

0 thoughts on “NUN SAYS SHE DIDNT KNOW SHE WAS PREGNANT……….GIVES BIRTH”