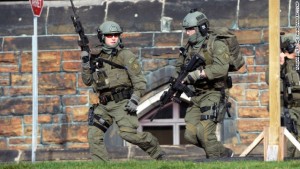 One person was shot Wednesday morning at a war memorial near Canada’s Parliament in Ottawa, police there said, amid media reports that gunfire also was heard in Parliament.
The Canadian Broadcasting Corp. reported that a soldier who was standing guard at the memorial was shot. Gunfire also was heard inside the halls of Parliament, CNN affiliate CTV News reported.
The CBC is reporting that parliament is on lockdown.
“We don’t know if it’s someone from the military who was targeted or not,” Ottawa police Constable Marc Soucy told CNN, adding that the gunfire was reported at 9:52 a.m. ET.
Parliament member Tony Clement tweeted, “I’m with colleages Mark Strahl and Kyle Seeback. PM was in Caucus but now secure. Assuming it’s not safe to venture out yet…”
Clement tweeted that there were “at least 30 shots.”
Police were searching unlocked rooms in parliament, Canada’s Globe and Mail journalist Josh Wingrove tweeted.
He told CNN that he heard dozens of shots.
Earlier this week a man who Canadian authorities said was “radicalized” was shot to death after hitting and killing a Canadian soldier.
This is no indication that that incident on Monday and Wednesday’s shooting are related.
In Monday’s vehicle attack, police arrested Martin Rouleau Couture, who reportedly converted to Islam about a year ago, last July and confiscated his passport, but lacked enough evidence to keep him in custody, said Martine Fontaine of the RCMP.
“When he was arrested, he was about to go to Turkey,” Fontaine said. “We stopped him as he was about to leave Canada for terrorist actions. He was questioned when he was arrested. We have not been able to determine any real threat at this time.”
Police: Man who ran down and killed soldier was ‘radicalized’