PEOPLE SEE WHAT YOU CAN DO…….. 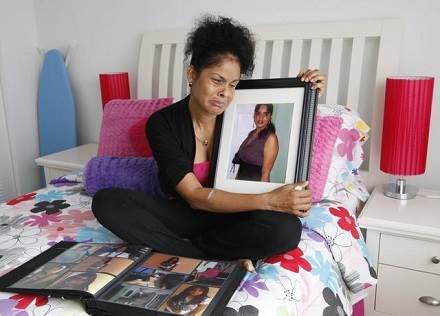 Wish Book is trying to help hundreds of families in need this year.

To donate, pay securely at MiamiHerald.com/wishbook

Camille Hamilton, a bullet lodged in her head, her left eye blinded by blood, somehow managed to survive a crime so horrific that she is still petrified of the dark — four years later.

She had brought her 15-year-old daughter, Nekitta, to South Florida from Jamaica to buy a Sweet Sixteen dress and party favors for her upcoming celebration. The teen asked for a black and white theme. Her doting mother aimed to please.

Nekitta never made it back to Jamaica for her party. Instead, a random act of violence took her life and the lives of two family friends. It also left Camille Hamilton partially deaf and blind and scarred forever. Her daughter’s body was shipped back to Jamaica for burial.

On Aug. 16, 2009, around 11 p.m., an armed robber ambushed Hamilton in the driveway of the two-story Miramar home where she was staying with her best friend. The robber demanded money. She gave him the $80 in her wallet. According to a police affidavit, he ordered her into the house, gathered the other three people inside, forced one to bind the hands and feet of the others with duct tape, then shot each of them in the head, execution style.

When the shooter put down his gun to tape up the fourth victim, Hamilton crawled to the weapon and fired two shots at the man. She missed. He pulled her into the hallway and shot her in the head, on the left side.

Hamilton was left for dead, but she awoke 14 hours later, bloodied and disoriented. She reached around for her cell phone, began pushing buttons, and hit redial, which allowed her to reach a friend, who alerted police. They arrived to find a grisly scene.

Fourteen months later, Miramar police were able to zero in on a suspect by linking his DNA to the duct tape. The suspected killer was a 33-year-old transient and lifelong criminal named Kevin Lavon Pratt, whom they found in a North Florida prison serving a year for fleeing a police officer in Miami-Dade County.

Hamilton traveled to the prison and identified Pratt in a lineup. She then confronted him with one question: “Why?’’ She got no answer. Just a blank stare. Pratt remains in a Broward jail, awaiting trial, charged with three counts of first-degree murder and one of attempted murder.

Four years have passed since that August night. Hamilton’s pain has not subsided. She still cries. She talks to her dead daughter throughout the day, and writes her in a daily journal.

She now lives in a quiet, gated community in Palm Beach County, where she preserves one of her apartment’s bedrooms and a bathroom for Nekitta. The rooms are immaculate, decorated with butterflies and flowers, in purple and pink, her favorite colors.

Sitting on the bed, propped up on pillows, is a photo album filled with pictures of Nekitta’s abbreviated life.

“I keep a room to remember her because it makes me feel better,’’ Hamilton said. “When I can’t sleep and I go inside the room, I fall asleep. I try to tell myself she’s not gone, she’s still with me. It’s so hard without Nekitta. Knowing she’s not coming home from school anymore, never calling me, “Mommy.’’

Hamilton sometimes cooks her daughter’s favorite dinner, pasta and meatballs, and sets a place setting for Nekitta. Whenever she leaves the apartment, she says, “No boys allowed,’’ the same words she used to say to Nekitta.

People tell her to let go, to move on. She says she can’t.

“Talking to her and writing to her helps me and motivates me,’’ she said. “Some people think I’m sick and crazy. They think it’s not a good thing to hold on to stuff, I have to let go, but come on. Anybody can put themselves in my position, losing my only child, my best friend and her son.’’

She opens up the blue 2013 journal, and begins to slowly read the passage from Nov. 26, which would have been her daughter’s 20th birthday.

“Thank you Lord God for health and strength and everything you have done and are doing. Thank you for the birth of Nekitta, my angel. I guess it’s only you alone know if it’s time for her to go at the age of 15. Only you know Lord…Only you know.

“Hi Nekitta, my angel, my baby Nekitta. Your memory lives on forever. Today is a day you would be 20 years old. (Hamilton pauses to weep) I don’t know why you had to leave. Only God knows. I love you and I want to say Happy Birthday and all the best my angel. I know you may not be here with me in flesh, but you’re here with me in spirit. And you’re never gonna leave Mommy or forsake Mommy, my angel. And I know your soul rests in peace. Happy Birthday. I love you.’’

This time of year is particularly brutal for Hamilton because Nekitta’s birthday is followed by Thanksgiving and Christmas, and the images of families celebrating together are constant reminders of her loss. Hamilton and her husband, reggae singer Eustace Hamilton, are going through a divorce, making things even more painful.

Nevertheless, she put up a Christmas tree, decorated in red and gold, with a photo of Nekitta in the angel’s spot on top. Nekitta loved Christmas trees so much she once defied Hamilton’s orders and sneaked to Kingston with friends to buy a tree. Hamilton says this tree is for Nekitta.

There are no gifts under the tree. There isn’t much Hamilton wants. In fact, there are only three things on her wish list, and she knows she will never get the first – “to have Nekitta back.’’

The other two wishes are more attainable, which is why she was nominated for the Herald’s Wish Book by Tania Rues of the Miramar Police Department and Bridget Schneiderman, a crime victims’ rights advocate.

“We see a lot of victims, and Camille just really stuck with us,’’ said Rues. “She has been through so much, and had some real low times, but she has a good heart and is trying her best to provide for herself the best she can. Any help she can get will be truly appreciated.’’

Added Schneiderman: “People tend to forget about the victims. They have issues they have to deal with the rest of their lives.’’

Hamilton has undergone seven surgeries to her head and face, including one last Friday to relieve pain and allow her left eye to tear more normally by moving a bone from the back of her head to her face. With each surgery, she hopes her face can get closer to normal because the disfiguration is a painful reminder every time she looks in the mirror. The medical bills and prescriptions are costly, and her insurance doesn’t cover everything.

“The insurance company says some of this is cosmetic, but I’m not trying to cover wrinkles, I was shot in the face,’’ Hamilton said.

She has had to take time off from her job as an in-house aide for the elderly, so she could use financial help to cover her bills until she is strong enough to return to work.

Her other wish is to see her mother, Dawn Ryan, who remains in Jamaica and has been unable to get a visa to visit Hamilton. As the victim of a crime, Hamilton was granted a U-Visa because she had to stay in the United States to deal with the criminal case and her medical issues. That visa requires that she not travel abroad for five years, so she has been unable to see her mom or visit Nekitta’s gravesite.

The only memorial Hamilton can visit is an engraved stone at the Garden of Reflection: A Place for Remembrance, a memorial park in Davie’s Long Key Nature Center that was set up by the Broward Victim’s Rights Coalition.

“She cries all the time,’’ said Hamilton’s aunt, Marcia Dunkeley, the only relative she has in South Florida. Dunkeley is her mother’s younger sister, and has been taking care of Hamilton since the murders. “Not having her mother here, is worrisome to her. She can’t go to Jamaica, so if her mother could come visit with her, that would be really awesome. It would make a huge difference.’’

In the meantime, Hamilton tries to find a purpose to her life, a reason to wake up every day. Working with the elderly lifts her up, makes her feel needed. She says patients Martin and Marian Levine were particularly inspiring. Martin, whom she called “Papi,’’ gave her pep talks, and when he died last year, she felt tremendous loss.

“At the beginning, I wished I was dead,’’ she said. “I wasn’t eating, dropped from 130 pounds to 90. I didn’t want to talk to anybody. My face was twisted, hanging down. And then I keep saying, maybe God left me for a purpose. There’s got to be a purpose because I am the only survivor and the only witness. All I want from this is justice. I can’t have my baby back, so I want justice.’’