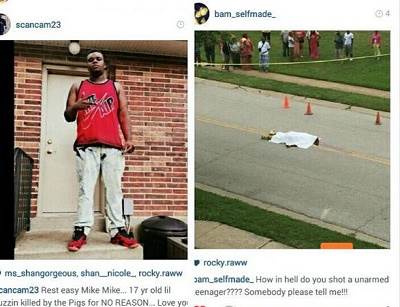 FERGUSON, Mo. (AP) — A law enforcement spokesman says a large crowd has confronted officers, yelling such things as “kill the police” after a police officer fatally shot a male in a St. Louis-area neighborhood.
SEE ALSO: Police Gun Down Ohio Man Holding Toy Rifle In Walmart
St. Louis County Police spokesman Brian Schellman says shots were heard at the scene Saturday afternoon in Ferguson, a few miles north of downtown St. Louis. Schellman said “a couple hundred people” came out of nearby apartment buildings after a Ferguson officer shot the male. He didn’t identify the person or say what prompted the shooting.
Schellman says there were no reports of additional injuries at the scene, and the crowd was under control by 5 p.m. About 60 other officers initially responded to the area.
The victim has been identified via social media as 17-year-old Michael “Mike Mike” Brown. According to Ferguson resident La’Toya Cash, he was shot 10 times by Ferguson Police.
Brown, a 2014 graduate of Normandy High School, was scheduled to begin classes at Vatterott College on Monday.
According to Dorian Johnson, he was walking with Brown when an officer confronted them and drew his weapon.
“He (the officer) shot again and once my friend felt that shot, he turned around and put his hands in the air,” said Johnson. “He started to get down and the officer still approached with his weapon drawn and fired several more shots.”
“He was a good kid. He didn’t live around here,” said Desuirea Harris, grandmother of the victim. “He came to visit me and they did that to him for no reason.”
Brown’s mother, Lesley Mcspadden, reacts: