POSTED BY OUR JAMAICA..HOMELESS AND ELDERLY 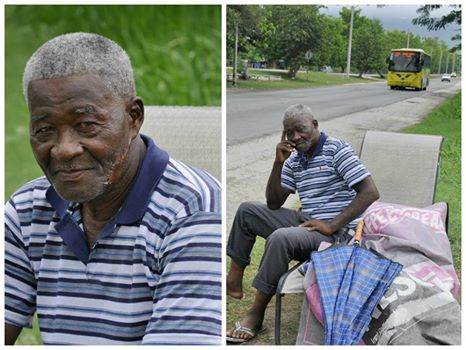 I have heard many stories about this gentleman who lives on the Mandela Highway in White Marl, St. Catherine. The most touching and believable one was the story of his girlfriend losing her life in a car accident on the said highway….he was supposed to meet her at a mutual time but he was late… he felt guilty and so visited the spot everyday on his bicycle, even sleeping there at times.
I was always curious…why did he choose to sleep there? Where was his bicycle I used to see him with? Does he have a family? Today I decided to talk to him. I mustered up some courage, pulled over and said, ‘’good evening, can we talk?” he seemed guarded….he looked me over and responded ‘’depends….what you wanna talk about?”
I pulled over…..
“I am a painter and gardener. I am homeless. I never owned a house. At one point I got a job to work on someone’s house. I fixed it up nicely and was living there. I planted fruits and vegetables including banana. I took great care of the place. It is a big house with enough room, but one day the family came from overseas and told me I had nine months to leave. I ended up on the streets. I use to own a bicycle but someone stole that from me.’’
“Don’t you get cold at nights?”
“I own a blanket and a jacket. I have a thermos for my tea and I own a few utensils. Everything I store right here. A nice gentleman stopped by with two chairs and told me to come get them. I thought they were broken but when I checked them out they were in perfectly good condition. A young lady asked me for one and I gave her.”
‘’Do you have a family?”
‘’Ask me about strangers, not family. I have two boys and I see them pass me here many times and pretend not to see me. I have a daughter overseas; I use to call and get her on the phone but lately the calls go to voicemail.”
“How is your health?”
‘’My health is not so great. I have an appointment at the Chest Clinic on Wednesday.’’
‘’How do you get around? Take a shower? Provide for yourself?”
‘’I have some buckets across the street that I use to store water to take my showers. I bathe before day break and head out. I cook here too. Many times, persons like yourself stop by and help me with whatever they can. I am always grateful.’’
So I had to ask the burning question….’’so the story about you losing your girlfriend on this highway isn’t true?” he forced a smile and said… ‘’ah child, people have many stories, they also say I am crazy, but that is their story, not mine…the longest liver will see the most.’’
We both stood in silence for a few seconds before he asked, “will people overseas read this?” I nodded. “Do you think my daughter will see it?” he asked. “I honestly hope she will”, I responded. I watched him opened a worn lunch bag and ruffled through appointment cards, what appeared to be a birth certificate, and bits of paper with telephone numbers written on them. He read aloud his phone number and concluded, ‘’if my daughter contacts you, can you give her this number…?’’
https://www.facebook.com/344642742346005/photos/a.344651722345107.1073741825.344642742346005/502556833221261/?type=1&theater

0 thoughts on “POSTED BY OUR JAMAICA..HOMELESS AND ELDERLY”