A priest was killed and another person was seriously injured following an attack at a church in Normandy, France, where officials said police killed two hostage takers.

Two armed men entered the church shortly before 10 a.m. local time, during morning mass, and took five people hostage at the church in a suburb of Rouen — located roughly 80 miles northwest of Paris — according to the Ministry of the Interior.

A nun and a parishioner were among the hostages.

The motive is not yet known, but the Paris persecutor’s office has opened up a terrorism investigation following the attack.

An official said police were called after someone from inside the church alerted authorities. 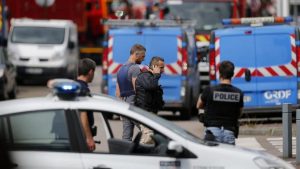 The church had not received specific threats, according to officials.

President Francois Hollande is at the scene.

The Vatican called the situation an act of “absurd violence” and said that the pope strongly condemned “every form of hate” and “prayed” for the victims affected.

4 thoughts on “PRIEST KILLED DURING CHURCH ATTACK IN FRANCE”