Standing in the shadow of a large ship were dozens of men and women wearing hard hats and reflective safety vests. Some had dirt on their clothes, signifying the hard work they had put in.

Just feet in front of them sat a dozen officials, clad in suits and ties, or skirts and heels.

While these two groups of people couldn’t appear anymore different, they all had one common factor — smiles on their faces.

These are the people who brought the dream of a fully-functioning port in Paulsboro to fruition. 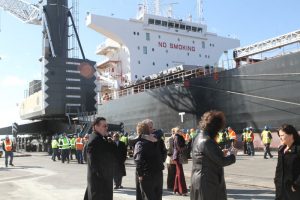 On Wednesday, Doric Warrior made its final leg of a long journey to Paulsboro from Russia. The ship, 230 meters long, carried the first shipment of steel to the Paulsboro Marine Terminal. Crews worked tirelessly to unload some of the steel before Senate President Steve Sweeney and Assemblyman John Burzichelli, the men who envisioned and backed the port since day one, would welcome guests to mark the occasion.

The aforementioned officials, along with those from the South Jersey Port Corporation and Holt Logistics, LLC, the first tenant of the port, took turns speaking, telling stories of what it took to bring this port to life and of the great things they hope it will bring to the region.

“This port is generational,” said Sweeney. “This port will sustain families for years to come.”

Burzichelli noted that the 700 workers employed to prepare the grounds, construct the port and unload the steel racked up roughly $25 million in payroll.

“That’s many birthdays, many Christmas’s, many things funded by those pay checks,” said Burzichelli. “It’s just the start.”

The port is set to open in mid-February, opening up hundreds of jobs and offering Paulsboro an economy boost.

Bob Miller, president and CEO of NLMK, said that NLMK steel will be bringing in 1.5 million slabs of steel to the port each year.

“We plan to expand and bring up to 2 million slabs,” he said.

“What we have in this ship is raw material,” he added. “Our 1,100 American workers will take and turn into real American steel,” he added.

“This is not just about steel,” said Leo Holt, president of Holt Logistics. “This steel is a magnet for other cargos. We have other customers interested and we will hopefully be announcing them within the next few months.”

Gary Stevenson, mayor of Paulsboro, was the last to speak and he said the port opening is the start of what will make Paulsboro great again.