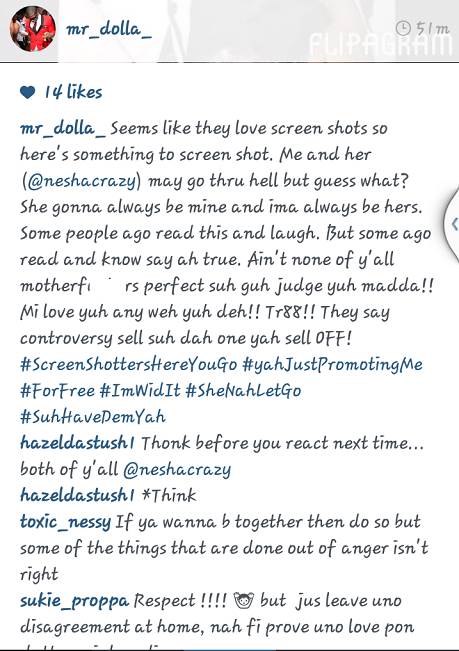 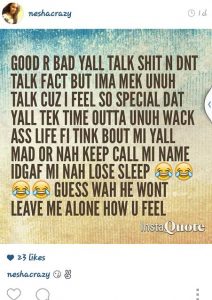 Mr Dullas or whaaaaaadeva yuh waa name yuh a talk like di people dem lift up u satin cap and go under it go draw out yuh and yuh baby madda business.Respect unnoself, and grow up while learning to respect yoself. Imagine yuh a talk bout people love screenshot and shamelessly put bout you nah lef she and she nah lef you as if anyone asked you to leave….Swallow some manhood now pills quickly and guh potty train yoself! How did people judge you or she? You were sucking and she was sucking di two a unno a two suckers thats all di people dem seh!
The worst thing is that there are children in the midst of this child-play and there is no do over when unno done set bad example. Is this the disrespectful life you want your children to see? Disrespect begets disrespect, so if is this is your life what are the mistakes your children are going to be left to make? No one is perfect but don’t come at the public as if this is our fault. Ah betta yuh did come and say ”I apologize to my mother and the the mother of my child for disrespecting where I am from, my son’s mother and I have since worked out our differences . What happened was a terrible mistake and should not have happened but we love each other and will continue to work on our relationship”. Dat sound like a responsible man don’t? Take a page and not the bait.

Nesha he won’t leave you alone *clap clap*, what’s next? You have a man that ”loves you” now what? Love yourself, don’t lust yourself because the novelty of lust wears off. God has blessed you with two boys, they are priceless gifts so treat them as such..You will not be Nesha young and crazy all your life. Putting your bedroom business out there to bring shame to the one you love says you are really living up to your name..Crazy ..And crazy makes bad things happen. Were he a different young man, we would be reading about you on the news. Think about things before you head to the point of no return.
Yours Truly,
Met