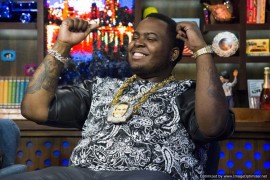 Sean Kingston failed to pay jeweler $200G worth of bling: suit
Avi ‘Da Jeweler’ Davidov claims that the ‘Dumb Love’ singer owes him for a $35,000 watch with 44 carats in diamonds, and a $150,000 custom diamond pendant and watch combo, as well as failing to return a $12,000 ring lent to him for a BET appearance.
Bling-loving singer Sean Kingston might have to tone down his look.
In papers filed in Manhattan Federal Court, jeweler to the stars Avi “Da Jeweler” Davidov says the “Beautiful Girls” singer hasn’t paid him for over $200,000 worth of jewelry.
The pieces Davidov says Kingston stiffed him on include a $35,000 watch with 44 carats in diamonds, and a $150,000 custom designed “SK” diamond pendant and watch combo – both encrusted with white and yellow diamonds.
The suit says he also loaned the Jamaican native $350,000 worth of jewelry to wear for an appearance on BET – but Kingston never returned a $12,000 ring from the shoot.
The suit notes that Kingston’s company has written Davidov numerous checks over the years, but says they’ve all bounced.
Davidov said he kept doing business with Kingston, 24, despite years of non-payment because they have a “personal and close relationship.”
Sean Kingston Sued For Not Paying His Jewelry Bill, And Some…
Sean Kingston is being sued by a NYC jeweler for not paying for several pieces of really, really nice jewelry — and two pieces of cubic zirconia. According to the lawsuit, filed in New York, Kingston got more than $200,000 worth of…
Davidov said “he agreed to favorable pricing, and extended credit terms for payment” since they first did business back in 2008, but still got bupkus.
The fed up friend wants $240,000 for the jewelry, and $1 million in punitive damages.
Kingston — who’s collaborated with the likes of Justin Bieber, Nicki Minaj and Chris Brown — has apparently been having money problems. TMZ had footage of his Bentley getting repossessed outside the Mondrian Hotel in Los Angeles earlier this year.
A rep for Kingston could not be reached.