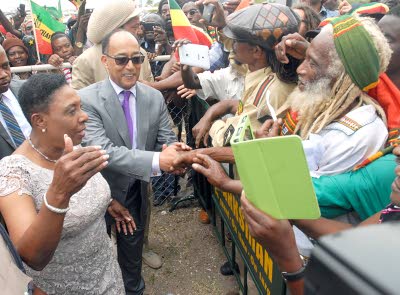 PRINCE Ermias Sahle Selassie, grandson of Ethiopian Emperor Haile Selassie I, arrived in the island yesterday to much fanfare among the local Rastafarian community.

Prince Ermias, who was accompanied by his wife Princess Saba Kebede, is here on a three-day visit to participate in activities to commemorate the 50th anniversary of his grandfather’s visit.

Hundreds of Rastafarian men, women and children flocked Norman Manley International Airport in Kingston, where the ‘prince’ arrived on a flight from the United States at minutes before noon.

But the Rastafarians, who were beating drums, chanting verses, and smoking marijuana, said the gathering was nothing compared to what was seen half-a-century ago.

Following a press conference, Prince Ermias — who lives in Washington, DC — emerged from the airport building and walked to the car park accompanied by Minister of Culture Olivia Grange, Transport Minister Mike Henry, and representatives of the Commemoration Committee and the Republic of Ethiopia. He greeted the crowd of Rastafarians and thanked the people of Jamaica for hosting him.
He then journeyed to the National Heroes Park where he was greeted by Mayor of Kingston Dr Angella Brown Burke, before placing a wreath at the shrine of national hero Marcus Garvey.

“…We are focusing on making sure that we represent our custom; practise lifestyle, as Rastafarians, to be involved and, I pray that everything works out. I give thanks to the brethren and the sistren dem who have been focusing on the tradition of Rastafarians over the period,” Bunny Wailer, the only living member of the Wailers singing group, told the

Prince Ermias and his entourage also made stops at the University of Technology, University of the West Indies, The Mico University, and Jamaica College, where he was greeted by former prime minister Bruce Golding, who attended the school.

Prince Ermias, in his response, thanked the Jamaica College family for the warm reception.

“You are the future …very bright people who would become future prime ministers, future scientists; but the important part of education is that you also have morality that goes with it that distinguishes what is right from what is wrong; what is just and what is unjust. Too many times today …we turn against what may seem a challenge because it doesn’t seem to resolve anything. What makes the difference and what makes leaders [are] principled commitments and if you work hard there is nothing you can’t achieve,” Prince Ermias told a group of Jamaica College boys.

Earlier at The Mico University, trainee teachers who shook Prince Ermias’ hands declared that there would not be any hand-washing for rest of the day as they wanted to cherish the moment.

“I am very elated to share in such a historical moment. I feel as if I am reliving a moment when Selassie I was here. So, to be a part of the festivity today, I am very proud,” declared history major, Rachel Dale.