The family of Miss Universe Jamaica 2011 Shakira Martin, who died on Tuesday, has set up a campaign aimed at raising the equivalent of J$2.5 million to, among other things, pay for her funeral expenses.

David McDowell, a family friend, established a GoFundMe account two days ago, seeking to raise US$20,000 towards “final expenses” for Martin. Up to press time last night, US$16,441 had been raised in just a day.

“The purpose of doing the fund was to help with the remains. We are doing something here for her, which we are planning for next week, and then we are going to do a cremation. We are going to have a memorial service in Jamaica because Jamaica was a very happy place for her,” Hall said.

Martin, who lived in South Florida, died at Memorial Hospital West in Pembroke Pines from complications of sickle cell anaemia. She was 30.

“In the morning when I saw her, I didn’t feel comfortable because they said they were worried about her heart. I went to visit her on my way to work and I gave her a kiss and I gave her some ginger ale, and I never heard from her for the rest of the day,” Hall said.

She said that her daughter was not her usual bubbly self that morning and she even said to her, “Can you imagine that they think I may have had a mild heart-attack.” Hall said that after those words Martin shook her head.

But when Hall left the hospital that morning, little did she know that it would be her last encounter with a conscious daughter.

“I was logging out to leave work early because I didn’t like the fact that I didn’t hear from her, and then when I logged out, the nurse called me to say that she was unstable and that I need to come now,” Hall said.

She said that later that evening, about 6 o’ clock, she got a call from a doctor to say Martin had taken a turn for the worse. It was at that point that Martin was taken to the ICU, where she later died. “She went off peacefully. There was no disconnecting of anything because I was not going to have her resuscitated,” the mother said.

Meanwhile, McDowell, who said he was like Martin’s “big uncle”, said the setting up of the campaign was his way of helping Hall. “When I went to the hospital and she died I was thinking, how can I help her mom with the financial part of it, and this was the conclusion. All I did was to facilitate it because I know she wouldn’t be able to,” McDowell explained.

In addition to paying for funeral expenses, the family said that the money raised through the campaign would be used to push Martin’s Shak Hope Foundation.

The foundation was established in collaboration with the Miami Foundation to elevate awareness, education, and care options for other affected families in the US, the Caribbean, and around the world.

“She has practically been admitted every month for the past year,” Hall said.

Martin, who was dedicated to spreading awareness about sickle cell, spent much of the last few weeks relying on an oxygen tank to breathe. However, despite being ill, she visited Jamaica recently and was in the island up to Monday. “When she came back she went straight to the emergency room,” Hall said.

“She just wouldn’t let anything stop her. I was like, ‘Shakira, you can’t go without the oxygen’ and she would be like, ‘I am going’. She was just singing and having a good time,” Hall said of the days leading to her daughter’s death. 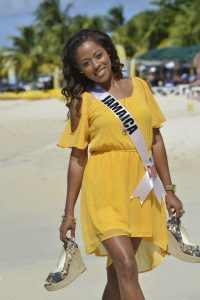 Hall told The Weekend STAR that her daughter was in Dubai in February, and within a month, she needed to have a medical port installed.

“It was after the port – when she took a long drive and a flight back – that the clot happened. The sickle cell itself is one thing, but the complications. What ended up happening is that she ended up having blood clots to one lung – three of them – and then they put her on blood thinners but they didn’t work,” her mother said.

“A month later, they ended up in the next lung, so they put her on something stronger,” Hall added.

She recalled that her daughter ended a marketing campaign on May 29, one day before her 30th birthday. It was then that Hall said “she just gave up and decided to take a break”.

“She was in the hospital in Virginia for one week,” Hall said.

On Martin’s return to Florida, instead of heading home, where a surprise party was being planned, she had to go straight to the hospital, and, remained there for about five weeks.

Hall said her daughter complained of pain in her bone, in her legs. At that time, she was on oxygen and blood thinners.

“When she came back from Jamaica, it was not about the clots. It was about the pain in her legs from sickle cell,” Hall said.