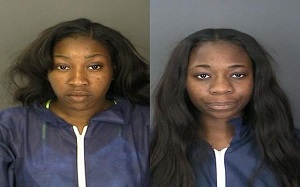 EASTCHESTER — Agents with the U. S. Secret Service are working with town police to find 52 credit card owners who were victimized by two New York City women caught at Lord and Taylor trying to use them to purchase clothing.

Kourtney Thomas, 20, of East 230th St. and Kevisha George, 18, of Olinville Avenue, both in the Bronx, are charged with second-degree criminal possession of forged instruments, a felony.

The women were carrying gift cards that had been embedded with the stolen credit card information, Det. Sgt. Matt Kiernan said.

On Wednesday night Thomas tried to use two of the cards in the White Plains Road store to purchase Frye women’s boots worth $298.93. When the store ran the gift cards they were found to have credit card information on them.

The sale was stopped and store security detained her.

George was also stopped by security when she tried to purchase Ivanka Trump and Uggs women’s shoes with one of the fraudulent cards.

Eastchester police were called and later brought the Secret Service into the investigation.

Kiernan said the two agencies are trying to identify the people whose information was fraudulently obtained and put on the cards.

24 thoughts on “SHAME OO..SHAME AND DISGRACE”