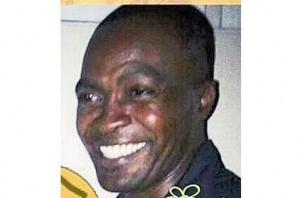 THE manager of Shaw Park Gardens in St Ann was yesterday shot dead inside his office in a mid-morning attack that raised concerns about security at the property.
A large pool of blood behind 45-year-old Wycliff Scott’s chair in his small office told the tale of the tragedy that has left his family and co-workers devastated.
According to the police, Scott’s firearm was taken by the two men who, at approximately 10:00 am, stopped by his office for about 10 minutes and talked to him before shooting him.
According to people at the scene yesterday, residents of the neighbouring communities of Pimento Walk and Parry Town normally walk through the property. Therefore, when the two men entered the property, yesterday, no one became suspicious.
After the murder, both men were seen running from the manager’s office. The men reportedly escaped in the thick vegetation that surrounds the property.
While many lamented the murder of a man they described as loving and caring, others expressed concern about the level of security on the property.
“How yuh fi have this big place and no cameras?” one angry man asked.
“If they have camera, the police could just look and see ah who,” he added.
Scott, who lived in Charles Town, St Mary, had been working at the property for the past four years. He is the father of two children, ages 11 and 15.
“He was a humble, quiet person,” one man at the scene told the Jamaica Observer. “He was a very nice understanding person, a caring loving guy.”
Assistant Superintendent of Police Throyville Haughton said the police would be dogged in their efforts to solve the murder. He said the Shaw Park area has been a concern recently and gave the constabulary’s commitment to bring calm to the community.
But people have pointed to the difficulty of policing the area due to the thick vegetation and the presence of several informal settlements.