SHE BELIEVES AN EVIL SPIRIT IS RESPONSIBLE FOR HER BARENESS 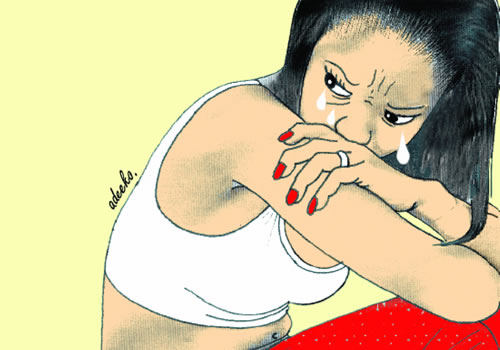 Dear Taiwo,
I never believed I would one day wear these shoes because looking back at my family history, as far as I know, I cannot remember any woman who suffered from infertility or if we had any case or issue of barrenness.
ADVERTISEMENT
I must confess, I am scared and unhappy and lately, I must say that my faith in God has been a little shaken, but I don’t have a choice but to hold on to him. I have been married for 11 years without a child.
The first nine years of my marriage was hell. It would have been better if I had a mother, but I must be sincere and thankful that my aunt, m y late mother’s immediate elder sister has been there for me.
I had no problem whatsoever with my mother-in-law, she accepted me like her own biological daughter when my husband took me home to meet her. Just like my late mother, she has two children, but hers were both boys, but I have an elder brother. Who is happily married with three children.
Like I stated above, my mother-in-law accepted me like her own daughter, but things started getting strained between us when I was unable to give her the much anticipated grandchild after two years of marriage. Although, she didn’t voice this out, but her attitude showed it all. Typically, she moved from pillar to post, trying to get help.
My husband and I are both Christians and we believed strongly that our children will come at God’s time. Though, a Christian too, maami,(that’s what we call my mother-in-law) did not share our faith 100per cent. I do not blame her as any mother in her shoes would be concerned. More so, because according to her, she has no hope of grand children from Pekun’s (my husband) elder brother as he suffers from Down Syndrome.
Mammi, visited different churches, imams, Alfa’s and even traditionalists. She would come with different concoctions for my husband and I to drink. Initially, when I used to reject them, she would quarrel with me that I wanted her son to die childless. Because of this, she decided to give these drinks to my husband to administer whenever she came with any.
Unfortunately, for her though, I pity her and the money she spent getting these things, but my husband has no iota of mercy for her as he threw them out as soon as he collected from her. He as much as instructed her to hand over even those meant for me alone to him, so that he would make sure I drink them.
We were all overwhelmed and happy, when I became pregnant, when my marriage was a little over eight years. I was happy, because, God has proven to all my detractors that I am not barren. We all awaited the baby’s birth.
He came as expected, delivered by Cesarean Section (CS), but unfortunately, he died three days after his birth. He was not sick, he was born, a healthy baby. My husband took it as God’s will. Though, I was devastated, but of course, I won’t die with him. But I was happy that God proved that I wasn’t barren.
I believe that He who did that would surely do another, but I am still waiting on Him to show me mercy once again. As expected, my maami, too was devastated when we lost our son. And after waiting few months and I didn’t get pregnant again, she began her runs and rounds to her supposed helpers.
Since my husband and I know how we deal with her concoctions and various helps, we were not bothered, we held on to God believing that He will do it again. I was however surprised when she came to visit about two months ago and she announced that she went for consultation and she was told that I cannot have a child unless I am separated from the ogbanje spirit and group which I belong to.
This is the most shocking thing I have heard in my life and to my dismay, maami, believed and swallowed this hook line and sinker. She said the traditionalist asked her to bring me to his shrine where I would have the deliverance.
Pekun, will not even hear of it. It became a big issue and maami accused me of turning her son against her. We are still at it now and this issue is tearing my home apart. Apart from the fact that I have to pray over my state of childlessness, I also have my husband’s issue to contend with.
He became a different person, and changed totally towards me the day I suggested that I probably should take maami’s advice and go for the deliverance. I suggested this because I wanted peace to reign. I didn’t like the fact that my once peaceful family has become something else.
Pekun became angry and accused me of consulting traditionalists behind him. I have never done this before and when I said that much, he queried my reason for suggesting to go with his mother in the first place.
Please, help me; my home has turned from being the peace haven I used to know. As if this is not enough, maami won’t stop at anything to tell people that I have manipulated her son with my ogbanje spirit and I have no intentions of having children.
Please, help me. I am not happy. How do I broker peace between my husband and his mother? I also need my husband.
Maryanne.
Read 1781 times Last modified on Thursday, 23 October 201