SHEBADA YUH SISTER NOT RITE IF A SHE DIS 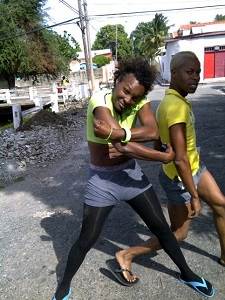 The sister of a popular actor appeared before the Corporate Area Resident Magistrates’ Court along with her landlord on Thursday to answer to unlawful wounding charges.

In a matter of case and cross-case, both the actor’s sister and the landlord of Franklyn Town addresses are charged with unlawful wounding.

The court was told that on October 23, the landlord and the actor’s sister were engaged in an argument which resulted in a tussle, after the landlord reportedly accidentally bumped into the woman in the yard where they both reside.

During the tussle, the woman allegedly drew a machete and the landlord was later injured.

The actor’s sister, however, refuted the allegations stating that the landlord attempted to sexually assault her.

“He tried to rape me! Him touch me pan mi vagina and grab up me breast. Him tek off mi towel and push mi pan di zinc. Is the zinc cut him inna him face,” she told the court.

An unconvinced Resident Magistrate Judith Pusey commented, “You look like a troublemaker, you really stand up mek dat ole man touch you like that?” To which the woman exclaimed, “he’s stronger than he looks!”

It was revealed that the actor’s sister and the landlord were no strangers to the courts, as they appeared before for a similar matter.

The woman told the court that the current dispute was triggered because the landlord wanted her to bathe in a bathroom that was attached to his apartment to which she refused.

“I made my own bathroom at my expense, the war is because he wants me to bathe in his bathroom,” she said.

The landlord stated, however, that the woman had a tendency to bathe in the yard in full view of other tenants and the community, and so he asked her to shower inside.

A police officer who resides in the Franklyn Town community told the court that there is some truth in the landlord’s statement.

“She is a troublemaker, she does bathe outside and gives Edwards his rent piece, piece, I’m tired of talking to her,” the district constable said.

The actor’s sister was ordered to move from the landlord’s premises by November 29.