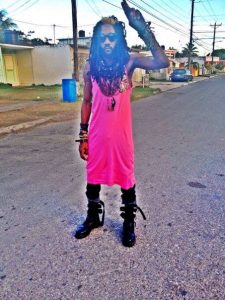 Message Body:
transvestic fetism……google this disorder..he wears female clothing just to fantasize sexual arousal…but he is not gay
DEN MI GO GOOGLE DI BELOW ……..IS WHICH ONE A DEM HAVE DIS DISORDER AND A DI TWO A DEM A WEAR OOMAN CLOTHES?

Some male transvestic fetishists collect women’s clothing, e.g. nightgowns, babydolls, bridal gowns, slips, brassieres, and other types of nightwear, lingerie, stockings, pantyhose, shoes, and boots, items of a distinct feminine look and feel. They may dress in these feminine garments and take photographs of themselves while living out their fantasies. According to the DSM-IV, this fetishism has been described mostly in heterosexual men.

There are two key criteria before a psychiatric diagnosis of “transvestic fetishism” is made:[2]

Thus, transvestic fetishism is not diagnosed unless it causes significant problems for the person concerned.
Gallery