The family and clan of slain controversial businessman Jacob Juma will lay him to rest according to Luhya customary rites befitting a prominent person whose life was taken away in a brutal manner, Nairobi News understands.

The late Juma’s sibling Grisham Juma revealed that elders from the Batura clan are all set to conduct traditional rituals to avenge his death.

Therefore Juma will be buried with a torch and knife, as tradition dictates, in what is expected to also be a heroic send-off that will be graced by top opposition politicians. 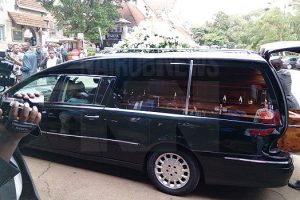 According to the Luhya tradition, burying a murdered person with a knife and a torch is for the dead man to go hunt for his killers.

Juma succumbed to injuries from two bullet wounds through his chest, according to official post mortem report.

His body was found inside his car on Ngong Road in Nairobi last Thursday night.

The car – a blue Mercedes Benz – had been sprayed with bullets and had the rear window smashed.