SO SAD..MARIO DEAN AND THE DEADLY PUNCHES THAT COST HIM HIS LIFE 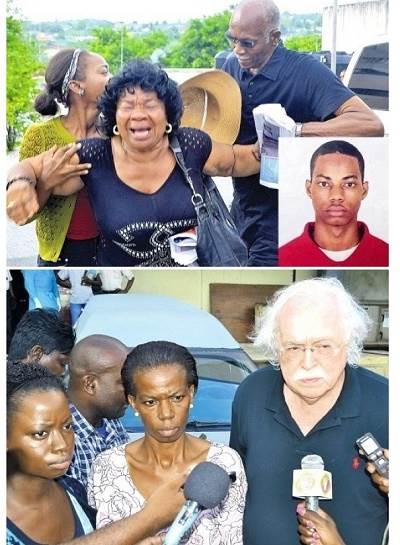 MONTEGO BAY, St James — United States-based pathologist Dr Michael Baden says that preliminary results from yesterday’s autopsy of the body of Mario Deane, who was beaten while in police custody in August, proved that he died from a rain of blows to his head and brain, consistent with punches.
The autopsy of the body of the 31-year-old was conducted by local pathologist Dr Murari Saranji in the presence of Dr Baden.
“The cause of death was multiple impact to his head and brain and compression to the neck — homicide,” Baden told journalists in Montego Bay yesterday following a marathon post-mortem conducted at the Cornwall Regional Hospital morgue.
“Dr Saranji was very co-operative and very helpful to me and to the family. We did confirm that Mario died of multiple impact to the head, face, brain and did suffer some neck compression,” Dr Baden disclosed. The renowned US pathologist said that Dr Saranji will get “additional studies finished”.
However, Baden said, while the autopsy proved that Deane died of a beating, it could not say by whom it was orchestrated.
“That’s going to depend on more information; the autopsy can’t tell you what happened, so that’s going to depend on credibility of witness statements, the kind of information that the crime lab is developing from talking to witnesses, and once all of that is gathered we will be able to compare it to the autopsy findings and see what the most credible explanation is,” Baden said.
“There was nothing sufficient to tell what kind of an object was used, if any was used. It could have been multiple blows from fists, could be pushed against a concrete wall, some kind of a hand or arm had to cause some of the damage to the neck, the compression of the neck,” he explained.
He also disclosed that autopsy results showed that there were broken facial bones and that there were marks on Deane’s wrist, consistent with handcuffs, but he could not say when they were made.
“… [I] can’t tell, can’t tell. There was some marks on the wrist, but I can’t tell when. Maybe when he was initially arrested or something,” he said.
Meanwhile, several of Deane’s relatives and members of the Rosemount community, where Deane lived, waited patiently outside during the autopsy, which lasted over five hours.
Mercia Frazer, Deane’s distraught mother, said she was satisfied with what transpired yesterday.
“INDECOM (Independent Commission of Investigations) was there, and there was an independent pathologist to represent the family, so we [are] go along with that,” a wearylooking Frazer said.
“I am satisfied. I am closer to closure; we don’t know exactly what happened yet. What you heard is what we heard too. Nothing much,” said a distressed Frazer.
At the end of the autopsy, the sight of the hearse leaving the facility with Deane’s body was too much for his aunt, Evadney Hamilton, to watch.
“Mario! Mario! Murder! Woi! Woi! Woi!,” she wailed, as relatives tried to console her.
Deane was arrested on August 3 for possession of a small amount of ganja and was taken to the Barnett Street Police Station to be processed. The police alleged that he was being offered station bail for the offence but failed to give them the required information, forcing them to keep him in custody. But a friend who went to post bail for Deane alleged that the process was almost finished when Deane expressed his dislike for the police. The officer then delayed bail and kept him in custody.
The friend said that he was told to return at 5:00 pm as she would be keeping him a little longer. However, the man said that he grew suspicious and returned to the station at 3:00 pm only to be informed that Deane, who had been in perfect health only hours earlier, was taken to hospital by the police. Deane slipped into a coma and never recovered. He died on August 6, Jamaica’s Independence Day.
Two inmates, Marvin Orr and Adrian Morgan, have since been charged in connection with Deane’s death. His death, however, has sparked outrage, which has stretched beyond Jamaica’s borders, with two prominent US-based attorneys offering their support to local attorney Miguel Lorne, who is representing the grieving family.
Jasmine Rand, a civil rights attorney and human rights activist, and Benjamin Crump, president-elect of the National Bar Association in the US and who represents the family of Michael Brown who was recently killed under controversial circumstances by police in Ferguson, Missouri, have opted to lend their support to the legal team.
Both attorneys were also part of the legal team that represented the relatives of 17-year-old Trayvon Martin who was shot dead by George Zimmerman in February 2012.

0 thoughts on “SO SAD..MARIO DEAN AND THE DEADLY PUNCHES THAT COST HIM HIS LIFE”

100 Users Online
Back to top