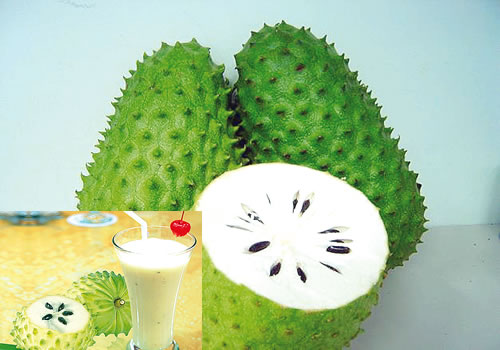 It’s a heart shaped fruit. It has a green, spiky exterior. Its skin is thin and quite leathery. Its rind has a bitter taste. Its inside contains a large mass of creamy, fibrous pulp with about 100 black seeds. When ripe, it gives off a distinctive aroma and a delicious taste that leaves your taste buds yearning for more. It’s the soursop.
Soursop known as Ebo in Yoruba, Sawansop in Igbo and Tuwon biri in Hausa, the soursop is one fruit that is currently drawing the attention of scientists. With several past researches and increasingly more current studies, this fruit is gradually coming off as a power fruit every tongue must relish. Primarily a rich source of carbohydrate, it also contains abundant vitamin C and several B vitamins such as thiamin, riboflavin and niacin. It is also replete with calcium, phosphorus and a small amount of iron.
A number of researches support the potential benefits of soursop as a remedy for several disease. In one study on the “Phytochemical and Pharmacological Properties of Annona Muricata: A Review” published in the 2012 edition of the “International Journal of Pharmacy and Pharmaceutical Sciences,” it was shown that an extract of soursop inhibited the growth of Herpes virus in the laboratory. The herpes virus causes infections such as oral herpes and genital herpes and can be dangerous in new born babies or in people with weak immune systems.;
In addition, another study carried out by a cancer centre summarised findings that suggested that soursop extracts might slow growth of cancer cells or make them more susceptible to anti-cancer drugs. One study published in 1997 in “Journal of Medicinal Chemistry,” showed that compounds from soursop were tested on breast cancer cells in culture and found to be up to 250 times more effective in killing the cells than some chemotherapy drugs.
Just like most fruits and vegetables, this wonder-fruit is also free of bad cholesterol and contains low calories, making it good for the heart and an ideal snack for those watching their weight.
Its rich fibre content is also great for bowel movement and prevents constipation.
In a study on soursop by Stephen Adewole and John Ojewole published in the 2009 edition of the African Journal of Traditional, Complementary and Alternative Medicine, the researchers pointed out that the plant can generally be used as antiparasitic, antispasmodic, astringent, anticancer, sedative, hypotensive, insecticide, piscicide, vermifuge, and for coughs, fevers, pain and skin diseases. They added that a decoction of the stem-bark and roots of the plant can also be used as remedies for diarrhoea, dysentery and intestinal worms. Also, the fruit pulp of the soursop can be used in treating fevers.
Whether ripe or unripe, the soursop fruit provides benefit for human health. Besides the highly nutritious health benefits, Adewole and Ojewole add that the unripe fruit can be used as an astringent, and can be utilised in the treatment of intestinal atony and for scurvy.
There have also been pointers to the fact that extracts from the stem and bark of the soursop plant has great wound healing abilities. Wounds are the first medical problem faced by the human race and researchers state that the knowledge about wounds and their management remains still in the primitive and stunted stage. The wound healing activity of alcoholic extract of stem and bark of soursop plant was found to show the marked reduction in area of the wound which was tested in albino rats, thus proving their possible use in the healing the wounds.
Incorporate soursop into your diet
When ripe, the soursop fruit can be enjoyed as a snack. Its rind is quite bitter and may not appeal to the taste buds but beyond the spiky exterior is a luscious mouth-watering pulp. It can be scooped and eaten or made into beverage. However, its seeds have been discovered to be.
For a thick soursop juice, first clean and peel the ripe fruit. Remove the seeds and cut up the flesh in large chunks. Toss it into a blender, add half a cup of milk or water. The fibrous pulp would be blitzed up by the blender. Depending on how thick or runny you want the juice to be, you can add the required amount of liquid. Once it is well blended, serve chilled.

One thought on “SOUR SOP FOR HERPES?”