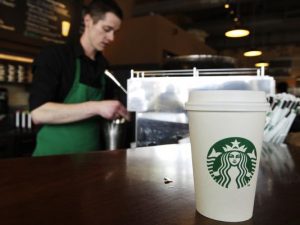 Starbucks employees nationwide will be eligible for a free college education through Arizona State University’s online program beginning this fall.
The new initiative, touted as the first of its kind, will allow many of Starbucks’ 135,000 workers to graduate debt free from ASU with no requirement to repay or stay on with the company. The funding will come from a partnership between ASU and Starbucks.
ASU President Michael Crow appeared in New York on Monday morning with Starbucks CEO Howard Schultz and U.S. Secretary of Education Arne Duncan to launch the Starbucks College Achievement Plan.
In a webcast of the event, Schultz called the program a “monumental historic moment” for the company and says the plan fits in with Starbucks’ history of trying to build a company with a conscience.
“The only way you can create long-term value for the shareholder is to create long-term value for your people,” Schultz said.
Under the program, Starbucks employees who work at least 20 hours a week will receive full tuition reimbursement if they enroll in ASU’s online program as juniors or seniors.
Others will be able to apply for scholarships worth $6,500, on average, if they enroll as freshmen or sophomores in ASU’s online program. And ASU advisers will help them apply for other, need-based financial aid, including Pell grants, which are federal grants based on family income and don’t have to be paid back.
Crow said Monday in the webcast that the partnership fits in with the university’s mission of providing access to a college education at a time when students from lower-income families are less likely to earn a college degree.
Roberts: Starbucks-ASU partnership is sweet
In recent years, ASU has built its online program into one of the nation’s largest, becoming a leader among public schools in a field that had been dominated by for-profits. About 11,000 students are enrolled fully online.
“We can say with total confidence that the 40 undergraduate degrees we are offering are a fantastic educational experience,” Crow said.
ASU’s online programs have gained a national reputation as well. The university was the only school in the Pac-12 to have its online bachelor’s-degree programs ranked in the top 10 by U.S. News & World Report in the publication’s most recent survey.
ASU has structured its tuition prices for online so that the division is a moneymaker that helps subsidize other areas of the university. Online classes are less expensive to offer than traditional, in-person ones because there are fewer infrastructure costs and instructors can handle more students.
For online students, ASU undergraduate tuition ranges from $480 to $543 per credit hour, regardless of residency status, with no additional program fees.
Schultz said it’s unknown how much the program will cost Starbucks or how many students will sign up. Company officials say about 70 percent of Starbucks workers — including those at Teavana, La Boulange, Evolution Fresh and Seattle’s Best Coffee — are students or aspiring students.
Enrollment in the program begins Aug.15, and students can start online classes Oct.15.
The plan received lots of buzz on social media. U.S. Sen. John McCain, R-Ariz., tweeted “Congrats to @ASU & Starbucks on this innovative new partnership!” and the White House tweeted “Great news: @Starbucks will provide free college tuition to thousands of employees.”
Others questioned on Twitter why Starbucks chose an online program, rather than giving employees a choice of more than one college.
Schultz said company officials talked with “a number of universities” and chose ASU because of its academic reputation and ability to handle an influx of online students.
“There’s a tremendous amount of work on the back end to make sure this is a smooth, seamless transition and opportunity” for Starbucks employees, Schultz said.
Republic reporter Anne Ryman contributed to this article.