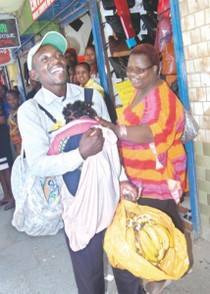 I saw this article on Deadbeat Kenya’s facebook and was impressed
MEET DANIEL NGUGI THE DAD ON THE
BEAT
Daniel Ngugi is no deadbeat father. The
banana hawker in Nairobi carries his five-
month old baby to work. His wife died in
March this year in a tragic road accident
leaving him with three children below the
age of five “Bananas, bananas for Sh10…” He shouts
as he goes about his business. Lying
peacefully on his chest is a baby
suspended on a carrier and a bag slings
off his other shoulder. Meet Daniel Ngugi,
36, a single father of three — twins Michael and Jane Ngugi aged four and
Baby Joyce Nyokabi, who is five months. While runaway fathers are being roasted
on Facebook group, Dead Beat Kenyans,
baby Joyce’s mother Chebet Ngugi, must
be looking from above smiling, knowing
that her children are in safe hands. Ngugi and Chebet lived in Kapsabet
where he ran a shoe business until April
this year when his life suddenly changed.
Chebet had travelled to Ngugi’s rural
home in Loitoktok to check on the family
land. She was heavily pregnant. Baby Joyce arrived before she could go
back to Kapsabet to her husband in March
this year. Two weeks later, they agreed
that she joins her husband at Kapsabet.
However, that was never to be. Chebet
died after a tragic road accident at the infamous Salgaa black spot along Nakuru-
Eldoret highway. Luckily, baby Joyce escaped unhurt. “My
wife succumbed to head injuries at
Nakuru District Hospital,” says Ngugi. He
was left with three children to take care
of. Then, baby Joyce was barely two
weeks old. “There was nobody from both our families
who could help me take care of the
children. Chebet’s mother is sickly while
her sisters are still young. Her mother had
also remarried after the death of Chebet’s
father, so they were living with a step- dad. I come from a single mum family. We are seven of us, but one sibling died.
We are all from different fathers. I was
introduced to my father who lives in
Lang’ata, but he wanted nothing to do
with me. He said he had a family and if
his sons got to know about me, they would kill me. My brothers are drunkards and my sisters
are not well off,” he says. He decided he
would be a mother and a father to his
kids. He moved from Kapsabet to Nairobi
to start afresh. “I arrived in Nairobi, late
one evening and decided to look for a lodging or a guest house for me to rest
hoping to get a house we could rent the
following day. Shock on me, one look at me and my
baby, and I was turned away. Finally I
spent the night at a friend’s house,” he
says. He decided to start selling bananas
to earn a living, but, he had no one to
babysit. He decided he would be carrying the baby to work and enroll the twins in a
nearby kindergarten. It was a hard role to take on as he had to
monitor everything the children did. He
had also to learn the basics of childcare.
Ngugi wakes up three to four times at
night to feed baby Joyce. “My day starts at
5am. I wake up and prepare breakfast. I then wake the twins, wash them, serve
them breakfast and escort them to
school. Then I come back to the house and
attend to the household chores. I also
cook porridge and take it to the twins by
10am, then take them lunch by 11.30 am. I leave the house with baby Joyce at
around noon,” he says. Baby Joyce has been on formula milk ever
since her mum died. Recently Ngugi
weaned her. “I prepare mashed bananas
and potatoes with spinach. I feed her
before we leave and in the evening,” says
Ngugi. In baby Joyce’s bag, which he carries
every day, is formula milk, hot water in a
thermos flask, a feeding bottle, and
pacifier. He also carries extra clothes,
diapers and a baby shawl to shield her
from wind and dust. He gets his bananas at Marikiti retail market in Nairobi then
sells them. “I buy bananas worth Sh300 then sell
them to people at malls, offices and
exhibitions. I avoid selling by the roadside
to shield baby Joyce from dust, wind and
sun. Within two to three hours, they are
usually finished and I often go back home at 3pm with a profit of Sh300,” he says. His job has not been without challenges.
Some people who see him carrying the
baby laugh at him, saying he is being
‘ruled’ by his wife.

0 thoughts on “TAKE A PAGE MEN”