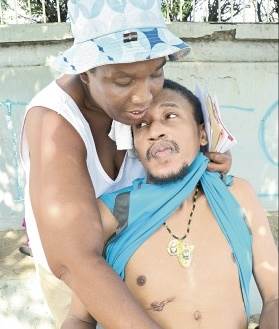 ORVILLE Bentley is the epitome of the term casualty of war.

In the prime of his life he cannot speak, is totally incontinent, wheelchair-bound and, in short, lives in a totally vegetative state.

That condition has beset the 30-year-old ever since he was shot multiple times by a sniper perched on top of the Kingston Public Hospital during the security forces’ operation in Tivoli Gardens, West Kingston, in search of now incarcerated strongman Christopher ‘Dudus’ Coke four years ago.

According to his still shaken mother, Hilda Johnson, her son is a victim of his own kindness as he was gainfully employed and was not among the alleged horde of gangsters who had barricaded themselves into the former untouchable garrison and vowed to defend Coke against any arrest by the security forces.

“Him was standing at him door and see when a youth get shot by a soldier who was on top of the hospital. Him run to try and help the youth and the same soldier shot him up. Lord have mercy, my son never do anything to deserve this life,” the woman, who was on the verge of tears, said.

As she spoke, Bentley’s expression depicted confirmation but sadly he could not say a word and a small tear trickled from his right eye.

As a result of the gunshot injuries, Bentley’s kidney, liver and lungs have been permanently damaged.

His brain has also been badly damaged as, according to Johnson, the oxygen supply that had been hooked up to his brain had been cut off for some reason and caused him to lose his ability to speak.

“It not fair to him. All he was doing was what him do all him life, help people. Him used to work and take care of himself. Him never depend on anybody, now him can’t even move from one place to another without somebody help him. We have to feed him, clean him, him can’t even hold a spoon. It hard, ’cause him wasn’t no gunman,” she said.

Johnson told the Jamaica Observer that she and her family have lived at premises on Orange Street known as ‘Big Yard’ — the former home of the late Crown Prince of Reggae Dennis Brown — for all their lives and none of her sons or male relatives is aligned with any faction from Tivoli Gardens.

Traditionally, people who live in the section of downtown Kingston where Johnson and her relatives reside are on a different side of the political fence than those in Denham Town and Tivoli Gardens — the main areas that were being targeted by the security forces during the Coke operation.

Johnson is also upset that her son was forced to lay in the street for seven hours before residents were allowed to take him to hospital for treatment.

“Him get shot from 12 and never get treatment until seven. Is some youth push him to hospital on a handcart. Look how near the hospital is to where him get shot?” she said.

Johnson is also pleading for assistance as she has been burdened with the weight of the financial cost of taking care of her son and said she has even approached the Office of the Public Defender in a bid to get redress.

“It is very hard to look after him. Him have to have a regular supply of pampers (incontinent diapers) as him don’t even know when him pass stool or urine. It sad how a hearty young man just have to sit out him days in a wheelchair simply because him try to help someone,” she said.

She also urged members of the public not to be judgemental about the people who were killed or injured during the operation.

“Is not every one of them was taking on the soldier and police. Some innocent people dead and get shot; my son is one of them. Please don’t judge,” she said.