THE MURDERERS WE BRING INTO OUR LIVES..SMH 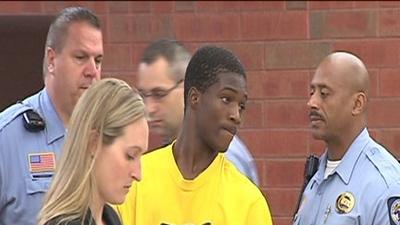 HARTFORD — In the last moments of her short life, Tyasia Allen was behaving like a typical 13-month-old — she was whiny and fussy.

David Brown-Barrett, the 19-year-old Hartford man who was caring for Tyasia, would later tell police that he was tired and tried to get the little girl to stop crying, but he couldn’t. “So he punched the baby once in the stomach with his right fist,” according to an arrest report made public after Brown-Barrett’s arraignment Friday on charges of first-degree assault and risk of injury to a minor.

“Brown-Barrett stated the baby stopped making noise and just laid on the bed,” the report continues. Brown-Barrett, who is 5 feet 8 and weighs 175 pounds, left the baby and went into his home’s backyard, where he was “thinking and crying,” according to the report. Later — Brown-Barrett was not sure how much time had elapsed — he went back into the house. The baby was not breathing and had blood, mucus and foam coming out of her mouth and nose.

Brown-Barrett took the baby into his home’s kitchen and washed her face, he told police. He then rubbed an ice cube on her face in an attempt to revive her. He then tried to make her stand up by holding her hands, but her body was limp.

He then carried the baby into his bedroom and laid her on his bed and told his brother to go to a neighbor’s house to call 911, according to the report. The neighbor was not home. He then went across the street to use a neighbor’s phone to call the baby’s grandmother, Gloria Henry, but he could not reach her.

Brown-Barrett then ran to his cousin’s house on Enfield Street and told her the baby was not breathing. He and his cousin ran back to his house, and she asked a man on the street to call 911. His cousin then flagged down a friend driving by and asked her to drive them to the hospital.

At St. Francis Hospital and Medical Center, Dr. Douglas McAdoo tried to save the baby, but she was already in full cardiac arrest, he later told police, according to the police report. The baby arrived at the St. Francis emergency department at 12:14 p.m. and was pronounced dead at 12:36 p.m.

It’s likely that the child was dead for some time, McAdoo told police, because her body temperature had dropped to 93 degrees. McAdoo found “bruising on the victim’s belly, on the left side of the navel, that looked like knuckle marks consistent with a punch,” according to the police report.

When he talked to police later in the day, he changed his story and admitted punching the child.

Dr. Susan Williams of the medical examiner’s office ruled the baby’s cause of death to be blunt impact and the manner to be homicide.

Alexander set Brown-Barrett’s bail at $1 million and ordered him back to court Sept. 27.

Brown-Barrett had been dating the baby’s mother for about a year. The mother, Demi Henry, 21, told Hartford major crimes division detectives that she had left the baby with Brown-Barrett when she left for school about 10 a.m. She said she and her baby had been living at Brown-Barrett’s mother’s house at 162 Middlefield St. for about a month.

After hours of investigation, police charged Brown-Barrett on Thursday night with assaulting the baby.

The courtroom was packed with members of the baby’s father’s family, Brown-Barrett’s family and relatives of the mother. Tensions grew outside the courtroom, and then in front of the courthouse, with accusations shouted back and forth. Judicial marshals kept the families apart.

Henry did not attend the arraignment, said her lawyer, Carmine Giuliano of Hartford. “She’s too distraught to be here,” Giuliano said.

On Thursday, after being called to the hospital about the baby, police initially went to the mother’s family’s house on Burnham Street, but then they moved their investigation to 162 Middlefield St. after learning that was where the baby was hurt.

State Department of Children and Families Commissioner Joette Katz said Friday that the child protection agency had had contact with the baby’s family near the time of her birth because of a faulty report from the hospital that the mother had tested positive for drugs.

No other concerns were presented to the agency. Brown-Barrett “was not involved with the family in any way at that time, according to the information we have available,” Katz said.

0 thoughts on “THE MURDERERS WE BRING INTO OUR LIVES..SMH”