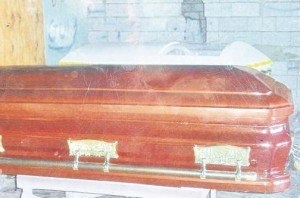 KENNESHA Barnes and her mother Donaree Barnes were left wide-eyed and o-mouthed yesterday morning when they discovered that an expensive casket on display inside their funeral home in downtown Kingston was stolen.
The thieves, who broke into Barnes Funeral Service on North Street, also took a 14-inch television set.
The younger Barnes told the Jamaica Observer that they were at home when they received a call at approximately 5:00 am informing them that there was a break-in at the funeral home.
“When wi come wi see the door push up and the grille wide open. We went inside and found that the TV was missing and the casket was gone,” Barnes said.
“The police came after 7 [am] and they said they would send some other police to come and take fingerprint and we’re here waiting all now,” Barnes told the Sunday Observer at 10:30 am. “They said we should come back to Central [police station] by 11 o’clock.”
Barnes said they have been operating the funeral service since 2008 and had never been robbed before. However, she appeared defeated by yesterday’s break-in, pointing out that the casket was very expensive.
“The casket is very valuable; she [her mother] sell it for $250,000,” Barnes said.
She explained that the casket, which was the only one in the home, is called the ‘octagon’ and that it is the newest style on the market.
“Those just come een; dem a run the place now,” she said.
The Sunday Observer learnt that a few weeks ago, another funeral service, this time on Orange Street, in close proximity to Barnes, was broken into and cleared of material used by the owner to build caskets.
Repeated attempts by the Sunday Observer to get a comment from the Central Police Station were unsuccessful as the phones there were either busy or rang without answer.