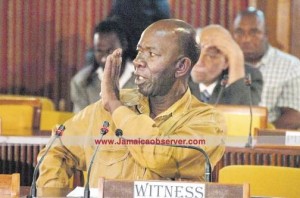 A witness broke down in tears yesterday, sending the Tivoli Enquiry into an unscheduled break, after she recounted for a second time how she had to jump in front her son, his father, and her nephew because she believed they were about to be shot by a soldier.
Roselyn Newton had given the same account during her evidence-in-chief led by Queen’s Counsel Garth McBean, saying that she told the soldier that he could not kill them because they were working men.
She also testified that her nephew, Lundi Murphy, was nonetheless killed by a police officer, who called him away from them. Under cross-examination she indicated that she didn’t see the policeman who shot him, but that she saw “fire” coming from his gun seconds after he walked over to them.
The tears came after Michael Lorne, representing the Office of the Public Defender, asked her to repeat slowly the account of how she jumped between the soldier and her loved ones. He told her that she was a brave woman for doing what she had done. She said she was kicked to the ground by the soldier who had grabbed her by the neck, but that she got up and again protested.
Commissioner Sir David Simmons had to break the sitting for about 20 minutes to allow Newton to compose herself.
Following the adjournment, Linton Gordon, representing the Jamaica Defence Force (JDF), asked Simmons to rule that attorneys should not ask witnesses to repeat aspects of their evidence that they were not challenged. The ruling was made.
The 41-year-old hairdresser was the second witness for the day to testify about losing a loved one during the May 2010 operation to apprehend then Tivoli Gardens strongman Christopher ‘Dudus’ Coke.
Dawn Brown testified that her 16-year-old son, Dale Davis, who was living with his grandaunt in Tivoli Gardens, went missing on May 25, 2010. Brown said she had given a swab for DNA testing, and that the person from the Independent Commission of Investigations, who took her to the Government forensic lab, told her that the results indicated that her son was dead. She said a relative had told her that soldiers had taken Davis away to “check him out”.
But their evidence didn’t go unchallenged by lawyers for the JDF and the Jamaica Constabulary Force (JCF).
Newton — who testified during the afternoon sitting of the enquiry at the Jamaica Conference Centre in downtown Kingston — said she and her family and a friend were at home when they were rounded up and taken to a section of the community where they were made to lay face down in mud. She told of the incident with the soldier and her nephew’s shooting.
Under cross-examination from Valerie Neita-Robertson (representing the JCF), Newton said that her nephew was shot while his back was turned to the police.
But Neita-Robertson pointed out that post-mortem report showed that Murphy was shot in the chest and had an exit wound to the back. Newton said she didn’t know of the report.
The witness said that shots were firing while her nephew was walking to the police. She said also that she didn’t see when her nephew fell after being shot.
She was next cross-examined by Gordon, during which she said the soldiers told her and her family to get down and that she would rather get down in mud than be hit with stray bullets.
Gordon also questioned her about a dead man who was found in her bathroom. Regarding this, she said she didn’t know the man, and that she didn’t let him inside her house.
Attorney Carol DaCosta, who is representing the Tivoli Committee, asked her why the soldiers told them to get down, to which she responded: “Probably they don’t want us to get shot or something.”
In cross-examination of Dawn Brown, Gordon asked if her son was “what you called a trouble child”, but she said no. He asked if he used to leave home and “go about”, and again she said no. She said he wasn’t suspended from Tivoli Gardens Comprehensive High School. Brown said a soldier told her that her son was seen at the National Arena, but that she didn’t remember when she was told this. She said she was aware that he “was treated as a missing person”.
Meanwhile, witness George Harriott testified that he was shot in the right hand. He had insisted that it was the soldier or police who shot him from a building in the Tivoli Gardens area, but admitted that he didn’t see who shot him.