TRANSGENDER WOMAN BURIED AS MAN BY HIS FAMILY 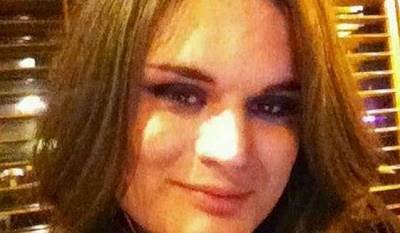 Friends of a transgender woman who passed away unexpectedly at the age of 32 were horrified to see her dressed and presented as a man for her open-casket funeral.
Jennifer Gable, a customer service coordinator for Wells Fargo, died of an aneurysm last month while on the job in Twin Falls, Idaho. Ms. Gable was born Geoffrey, but had been living the past few years as a woman named Jennifer.
Her friends said they were shocked to see their friend with her hair cut short and dressed in a suit for the funeral.
“I am disgusted,” Stacy Dee Hudson posted on Facebook, The Herald reported. “A great and dear friend’s mom went to the funeral today. It was not closed casket. They cut her hair, suit on. How can they bury her as Geoff when she legally changed her name. So very sad. Jen you will be missed and people who know you know that you are at peace.”
Additionally, a paid online obituary made no mention of Jennifer, and the photo that’s used appears to be of Geoffrey when he was a teenager.
“Geoffrey Charles Gable, 32, Boise, passed away suddenly on October 9, 2014 while at his job at Wells Fargo Bank,” the obituary says. “He was married to Ann Arthurs in 2005 in Hawaii. They were later divorced.”
“No mention of the woman she knew she was and had lived as for several years,” said Meghan Stabler, a board member of Human Rights Campaign and member of HRC’s National Business Council, The Herald reported. “Just erosion of her identity and an old photograph of how the father perceived her to be.”
Ms. Stabler said her friend’s death “stresses the importance of having a will.”
“She had done what she needed to do legally to be seen as her authentic self. Her father erased her identity either through ignorance or arrogance,” she told The Herald.
Mike Parke of Magic Valley Funeral Home and Crematory said Ms. Gable’s death certificate listed her as male.
“The death certificate says Geoffrey AKA Jennifer Gable,” he told The Herald. “The last few years she lived as Jennifer. They buried him as Geoff. A tormented situation for all those involved.” 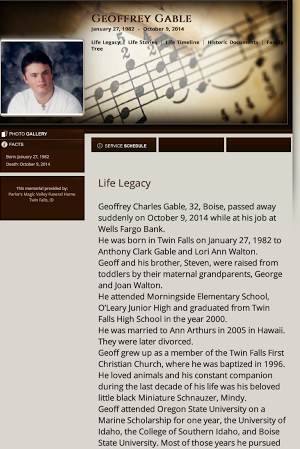 0 thoughts on “TRANSGENDER WOMAN BURIED AS MAN BY HIS FAMILY”