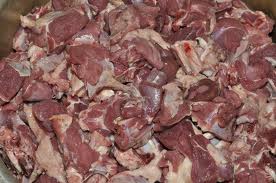 TWO Trinidad nationals were allegedly held by US Customs officers with close to $2 million worth of cocaine, four days apart, on Caribbean Airlines flights entering John F Kennedy Airport in New York.
The first Trinidadian was held with cocaine hidden in frozen goat meat in his suitcase while the other had it concealed in his pants crotch.
Court documents obtained exclusively by CCN, through the US District Court, Eastern District of New York, outlined in detail the arrest of both men in separate court documents.
Trinidadian Yudistir Ma­haraj, according to the documents, left aboard a Caribbean Airlines flight from Piarco International Airport, destined for JFK International Airport in New York, on March 20, and was caught by the US Customs and Border Protection (CBP) allegedly attempting to smuggle cocaine into that country.
According to court documents, Maharaj “did knowingly and intentionally attempt to import a controlled substance into the United States”.
Maharaj, according to the complaint, was selected for an examination by US Customs after arriving on Caribbean Airlines flight 520.
Special agent Michael Martinez indicated Maharaj “presented a checked-in, large black suitcase and a laptop bag for inspection.
When the officers examined the suitcase, they found three packages in the suitcase, which Maharaj claimed “in sum and substance contained frozen cooked goat meat. The three packages were X-rayed revealing a square-like object inside of each one”.
The CBP officers later took Maharaj into a private room and, according to Martinez in the court doc­ket, “drilled into the packa-ges and discovered a pow-
dery-white substance, which later tested positive for the presence of cocaine.”
In total, 3,335.2 grammes of cocaine were seized from food containers in Maharaj’s luggage.
This works out to approximately just over three kilogrammes of cocaine, with an estimated street value of $1.2 million to $1.8 million.
Maharaj, in his statement, claimed he did not know the narcotics were in his suitcase.
Four days after that incident, another Trinidadian, Alister King, was also held for allegedly attempting to smuggle cocaine into New York after leaving Tri­nidad aboard Caribbean Airlines flight 520.
King, who was stopped for a routine search, according to US special agent Derek Bergman, “appeared nervous”.
King’s personal baggage was searched and it was during this search, King appeared nervous, Bergman stated.
Bergman revealed in the court document a full-body search was authorised and “a bulky item was discovered in the defendant’s groin area”.
Officers later found three packages containing a white, powdery substance —which was later tested and found to be cocaine.
The three packages weighed some 536.9 grammes, just over a kilogramme—with a street va­lue of $400,000 to $600,000.
King told the US authorities he “was supposed to be paid 30 per cent of the proceeds after the cocaine was sold”.