TUH MUCH MOTHERS GET PREGNANT ROUND CARNIVAL TIME..TRINIDAD DONT HAVE BED FI DEM 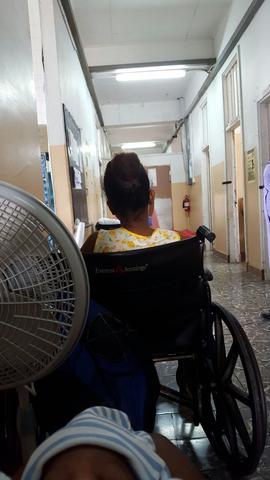 An influx of babies conceived during the Carnival season has left mothers and their newborns sitting for hours in wheelchairs, awaiting beds at the San Fernando General Hospital (SFGH).

Between Monday night and Tuesday morning, there were six mothers in wheelchairs while an additional three sat on recliners because of overcrowding.

A Point Fortin mother, who gave birth to her third child on Tuesday, said after leaving the theatre, she sat in the corridor of the postnatal ward with her newborn. She said babies also cannot find space in the nursery.

Describing the experience as horrible, she said the pain and uncomfortable feeling hinders the joy of having a baby. The mother, who asked not to be identified, said she was warded on October 3 and she and other patients had to wait days before getting a bed.

Those who made babies or were suffering with hypertension, diabetes or on the brink of labour would be given preference for beds, however she said a woman had to sit on a chair until being taken to the theatre. Another woman was told to return home as she was not ready for labour, but returned the following day after giving birth at home.

“I have been here eight days and a lot of women are coming to make babies and there aren’t enough beds. A lot of them are sitting on chairs, sometimes four of them are stuck up together. When the doctors see them, the may get a bed if you happened to make your baby that day. If you can’t get a bed, you will be stuck in a wheel chair for the most part off day until people are discharged.”

She said it was a horrible experience as being left on the labour ward screams from women during childbirth were heard.

The mother said she came from the Point Fortin Area Hospital but was transferred to the SFGH because of a low blood count.

Point Fortin has no anesthetist as the current doctor is on leave, however, the CEO of the South West Regional Health Authority Anil Gosine said all high risk pregnancies are referred to the SFGH. Gosine added that an anaesthesist is send to the PFAH twice a week.

Gosine said data showed that there is an annual increase of childbirths during the October to December months and in the last few days, many pregnant women have been coming in quickly.

He said the problem had nothing to do with the non-functioning of beds. He said while they try to discharge patients to make beds vacant to new patients, the problem should be alleviated when the new Point Fortin facility is operational with more space and better facilities.

3 thoughts on “TUH MUCH MOTHERS GET PREGNANT ROUND CARNIVAL TIME..TRINIDAD DONT HAVE BED FI DEM”