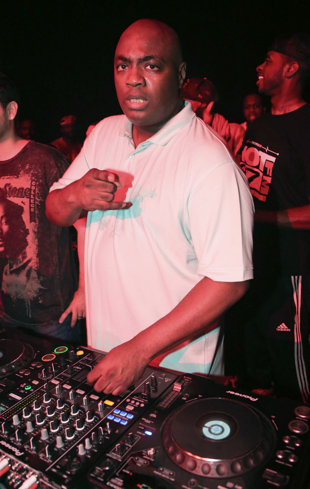 When a year-old audio clip of famed Hot 97 deejay Mister Cee was released Wednesday, in which the hip-hop veteran appeared to be soliciting sexual relations from a transgendered video blogger, he thought his career was over.

Cee, whose real name is Calvin LeBund, 47, resigned from his job, saying he did not want to draw negative attention to the radio station that had been his employer for decades. “I don’t want you guys to lose sponsors and money,” he explained.

But, on Thursday, Cee’s crisis of faith took another turn. Hot 97’s program director Ebro Darden had the deejay back on the air for an emotional and revealing conversation that touched on both Cee’s personal battles with his sexuality and the prejudices that have long prevailed in hip-hop culture. Cee wept several times throughout the conversation.

Despite admitting that he sometimes enjoys the company of men dressed like women, Cee initially maintained that he was not gay.

The music legend, who was instrumental in the careers of the Notorious B.I.G. (he famously helped connect Biggie with Sean Combs) and Big Daddy Kane, specified that he has never had sexual intercourse with a man, but that he was completely aware of the identity of drag queen Bimbo Winehouse, acknowledging his desires and sexual self-categorization were not completely aligned.

“I’m tired of trying to do something or be something that I’m not,” he confessed, adding, “I have been in denial with this for a very long time.”

Even a hesitant step away from stark heterosexuality is a big step in the world of hip-hop. Antigay attitudes have long prevailed, but in recent years, a marked shift seems to be occurring towards a more neutral – if not accepting – stance. Fans and media outlets, including the New York Times, Al Jazeera America, and the Huffington Post, have been talking and debating the issue on a large scale. Some sample tweets:

Last year, hip-hop collective Odd Future member Frank Ocean penned a “coming out” letter professing his love of a man. He later admitted fears about hurting his career, telling GQ, “In black music, we’ve got so many leaps and bounds to make with acceptance and tolerance in regard to that issue.”

But times certainly are changing. Ocean’s peers, Jay Z, Kanye West, and A$AP Rocky have all made public statements against homophobia recently.

Darden’s on-air acceptance of his longtime deejay, who has had multiple issues with the law and his sexuality in the past – he was arrested in May for attempting to solicit sex from an undercover cross-dressed police officer, and had similar arrests in 2011 and 2010 – was a large statement to his massive listening audience. He urged Cee to return to his post throughout the half-hour conversation.

By the end of the talk, Cee had rescinded his resignation and resumed his regular noon session, playing a combination of uplifting and dauntless tunes, including Sly and the Family Stone’s “You Can Make It If You Try,” Jadakiss’s “The Champ Is Here,” and ended his set with “Thank You (Falettinme Be Mice Elf Agin).”

Listen to Darden and Cee’s 30-minute conversation here, but beware

0 thoughts on “TWISTS AND TURNS IN GENDER-ITIES- MR CEE”