US SEH DEM A GO DO TINGS TO YEMEN

“Counterstrike, retaliatory strike: I can tell you that those things are things that we are looking at,” said Navy Captain Jeff Davis, a Defence Department spokesman.

The US Navy has said the missiles, which fell short of the USS Mason, a destroyer, and the USS Ponce, an amphibious warfare ship, were fired within an hour of each other on Sunday from territory in Yemen controlled by Huthi rebels.

“We want very much to get to the bottom of what happened,” said Davis. “We’re going to find out who did this and we will take action accordingly.” 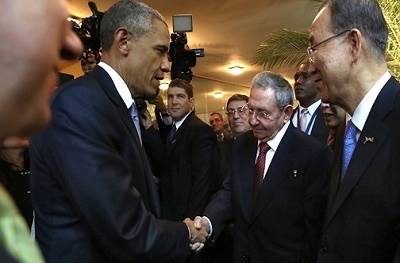 “We will make sure that anybody who interferes with freedom of navigation and puts US Navy ship at risk understands they do so at their own peril,” he said.

The United States backs a Saudi-led coalition that is fighting the Huthi rebels and the forces of former Yemeni president Ali Abdallah Saleh.

The US military provides intelligence and air-refuelling for Arab coalition aircraft conducting air strikes against the rebels. But US air forces are not directly involved in air strikes in Yemen.

According to the Pentagon, the missiles targeted the USS Mason and the USS Ponce, which were patrolling near each other. A Huthi spokesman denied the US ships were targeted.

The Mason took countermeasures after detecting the first missile, which fell into the sea.

No countermeasures were taken when the warships detected a second missile fired about an hour later. It also fell into the sea.

The incident came just days after a warship from the United Arab Emirates, a Saudi ally, was hit by rocket fire in the Red Sea.