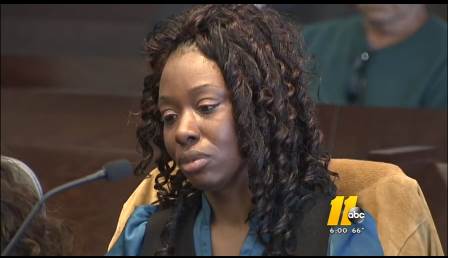 We first learned Crystal Mangum’s name in 2006 when she accused members of the Duke Lacrosse team of raping her while she worked as a stripper at a party. Many rallied behind her believing she had been the victim of a brutal crime. But all of that sympathy and compassionate dissipated when the country learned that she had completely lied about the accusations. And a North Carolina attorney dismissed all charges against the athletes.

And as of Friday of last week, Mangum’s name is back in the headlines as she was found guilty of the second-degree murder of her boyfriend Reginald Daye, who she stabbed with a kitchen knife in April of 2011. Daye died 10 days later from complications related to the stabbing. After arguments from the defense and prosecution a jury found Mangum guilty and Judge Paul Ridgeway immediately sentenced Mangum to a minimum of 14 years in prison.

Mangum and her attorney, Daniel Meier, argued that Daye posed a threat to Mangum and she feared for her life at the time of the murder. According to ABC 11, in his closing arguments Meier said, “He was bigger than her. He was on top of her. He was choking her. [She gave him a] single stab wound to the flank.”

But the prosecution said Mangum deliberately attacked Daye. They described her as a serial abuser with a history of physical violence towards her boyfriends. She was arrested on domestic violence charges involving another man in 2010.

On Wednesday, she testified on her own behalf saying Daye was angry with her because she had disrespected him by flirting with another man. She said he hit her and knocked her to the floor and threatened to throw hot water on her face so that other men wouldn’t want her. Mangum said Daye went to the kitchen and got a knife that he threw at her. She locked herself in the bathroom, Daye kicked down the door and grabbed her by the hair before pulling her into the bedroom.

Mangum said, “He straddled me, hit me and then he started choking me. I couldn’t breathe my head hurt real bad. I was just trying to survive and I felt like Reginald was trying to kill me.”

Mangum also faced theft charges for allegedly stealing Daye’s rent money. She was found not guilty on those charges.

Mangum’s supporters are convinced that her past with the Duke Lacrosse case unfairly influenced the jury’s decision in this case, believing that if it were another woman there would have been no trial in the first place. Others are certain that karma is finally catching up with Mangum for lying on those Duke students.

To me, the latter viewpoint is cruel. We weren’t there that night and weren’t in the courtroom to hear the evidence that either corroborated or refuted Mangum’s description of events. We’ll never know what really happened but it would be unfair and a complete miscarriage of justice if the only reason she was sentenced to 14 years was because she told an egregious lie seven years ago.

What do you make of Mangum’s case? Do you think she got a fair trial? Should she be serving 14 years right now?

You can watch footage from the courtroom, including the reading of the verdict and reactions from a Mangum supporter and Daye’s family in the video below.