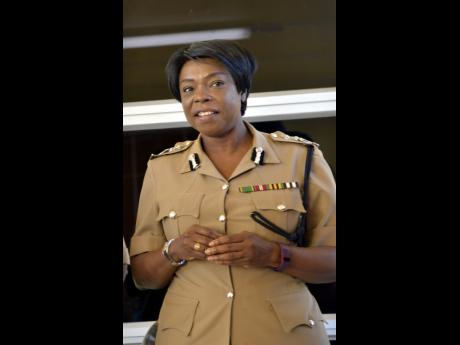 Novlette Grant yesterday started her 90-day stint as the acting head of the Jamaica Constabulary Force (JCF) having already served notice that Jamaica should not expect any crime-fighting miracles from her.

“Please, don’t look to me to create the world in seven days. I never claimed to have that power … . And I will not be working any miracles, except that miracle comes from the people of Jamaica to renew their hearts and their minds and attitudes to become our brother’s keeper in the truest sense of the word, by following the example of the Samaritan,” Grant told worshippers at the Boulevard Baptist Church in St Andrew at the start of the new year.

Last week some influential Jamaicans made it clear that while they do not expect miracles from the acting commissioner there are some concrete measures they want from her while she acts in the top job and from anyone who is giving the role on a full-time basis.
Arlene Harrison Henry – Public Defender

“I expect a new kind of vision with respect with investigation of crime and arrest of suspects. I expect a switch from the current mode of operation which is to lock up first and investigate after to the well prudent approach of investigations first, arrests after, and charge after. The investigations should be fair, independent and adhere to all the procedural rules and human rights safeguard. Currently people are literally getting away with murder because of the low apprehension rates.”

“Crime is certainly the biggest issue we have in our society and we hope and wish the acting commissioner every success. She can’t do it alone, we all have to pull together, hands and hearts together as private sector, public sector, government, opposition and the general public to make sure that we tame this beast. I hope that she is able to get the police force to a place where people can trust them. The police are not going to be able to do their work if they do not have the help of the citizenry. Right now the trust is low; some of it is for good reason while some of it is just perception. The new commissioner will have to work on that.”

“I expect that the individual who emerges as the new Commissioner of Police will continue to work to professionalise the Jamaica Constabulary Force (JCF) and remove undesirable cultures, the most significant being the ‘squaddie’ culture and instead encourage members of the Force to report misconduct of colleagues. The individual should be guided by principle and not expediency; and must strive to foster public trust through transparency. A comprehensive review and application of recommendations from the 2008 Strategic Review would also assist in the performance of the new role.”

“Like all well thinking Jamaicans we wish the incoming commissioner the best of luck. We hope that she can put systems in place that start to get the police force the reputation and the name that we need them to have. They need to be liked, respected and trusted by the populace and we hope that is something that she can achieve. Crime is our greatest devaluer; it devalues our property, our workforce, and our productivity and it is a monster that we definitely have to tame this year.”