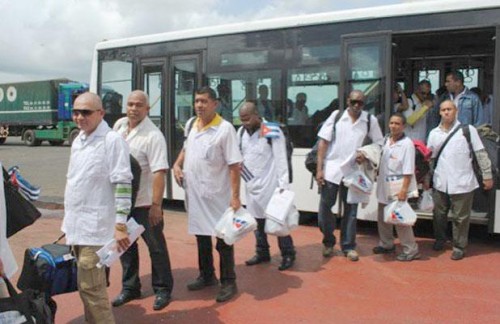 A team of 51 Cuban doctors, nurses and administrators arrived in Monrovia on Wednesday to assist Liberia in overcoming the deadly Ebola virus disease in the country.
The Cubans, who have volunteered to help Liberia eradicate the deadly virus, include 29 nurses and 20 doctors.
The Cuban team which also includes several specialists, touched down at the Roberts International Airport (RIA) in Margibi County yesterday morning and was received by Liberian government officials.
The all-male Cuban team was dressed in the traditional medical gown, with some holding up the Cuban flag.
Cuba’s ambassador to Liberia, Jorge Lefebre Nicolas said his country had sent the medical practitioners to Liberia in the spirit of African solidarity.
“We see ourselves as part of this. All of our people, heads of our liberation struggle, were brought to Cuba from Africa. We have a compromise with Africa. We cannot see our brothers in Africa in difficult times and we are there folding our arms in Cuba,” Ambassador Nicolas told newsmen.
Amb. Nicolas further stated that not long ago Cuba had decided to take part in this “colossal effort to fight the Ebola disease. We have the medical capability and the willingness to come and help with this disease.”
The Cuban Ambassador also stated that they are ready to collaborate with the Americans. “I think we should fight against Ebola; any other thing should be put aside,” Amb. Nicolas added.
Deputy Health Minister Matthew Flomo, joined by the Chief of Protocol, Mr. Rufus Neufville, and other officials, said the Cubans could not have come at a better time.
Min. Flomo said Amb. Nicolas had worked for a long time to establish the modalities leading to a partnership in the health sector between Liberia and Cuba.
“Now that we have more ETUs and given that you are here in Liberia, we will be going to the remotest towns to make sure that everyone infected with Ebola is brought to the ETUs for treatment and full recovery,” Flomo said.
The Minister further said that with the presence of the Cuban health workers, Liberians can now say that Ebola is not only retreating but would be kicked out of the country.
According to the Ebola situation report, which is released by the Liberian Government, at least 2709 victims have fallen prey to the virus. However, the World Health Organization says that as of October 15, there were 8,973 total confirmed and suspected Ebola cases of which there have been 4,484 deaths in the region.